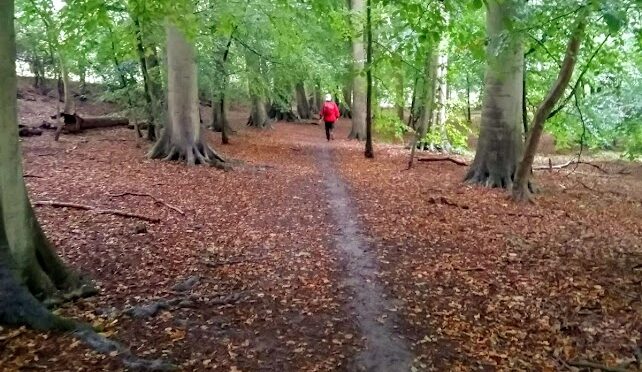 Eight Poly Ramblers assembled at Chorleywood railway station on the morning of a Saturday for which heavy rain was forecast.  And all too soon we would be only seven because Sunita had to withdraw with her slow-healing leg injury.  After descending through the common we climbed back up to the noisy M25 and a footbridge across, only to cross back a mile or so later. At this time it was still sunny and we were enjoying the southern view of the motorway when we noticed the northbound traffic being slowed up by some vehicles, not police cars but Lamborghinis! as spotted by the eagle-eyed Stuart (see photo), only the first of his visual acuity feats that day.  Later a lambo driver was reported to be assisting the police with their enquiries. Round about then the leader received a no-reply email supposedly conveying a picture message from another member but couldn’t get it to display. Later, in the evening, it eventually transpired to have been from Mike who had made his way to Chorleywood, having missed the group,  and must needs embarked on a circular walk of his own.  Sorry, Mike! Via the aptly named No-Dragons Wood and Old Shire Lane (marking the boundary between Bucks and Herts) we got within less than a mile of the walk’s starting point but there were no takers for an early return even though it had started raining heavily by then.  So through Carpenter’s Wood onto Chenies, where one sensible member went to the Red Lion pub straightaway while the others first picnicked.  After lunch we descended into the Chess Valley and saw the river in fine flow.  On ascending and aiming for the Chorleywood House Estate the leader, having in his time tried various ways there, picked an untried path which would cause us to emerge from the woods about half a mile further west than intended, adding about 1.5 miles in total. Sorry.

Photos from Stuart and Gillian