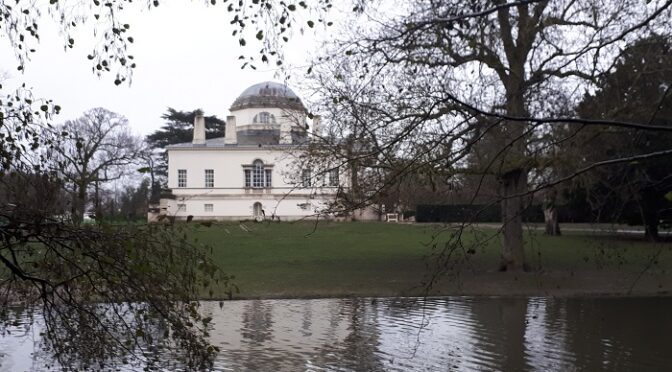 Ten Poly Ramblers met at Turnham Green station to begin our walk with a tour of the Bedford Park estate. (Norman Shaw architecture) A number of artists and poets lived here including WB Yeats. We then went onto Stamford Brook and into Ravenscourt Park a very traditional London Park with a lake and gardens and a tennis court. Both Danny and Sandy attended schools in the locality and shared memories of their escapades in the park. We continued to a café and toilets where at this point three of our walkers diverted into a local garden centre café whilst the rest of us continued on our route. We left Ravenscourt Park to cut across Hammersmith to reach the subway under the A4 to join the Thames path at Furnival Gardens. High tide resulted in a group split headed by Danny going a longer way round leaving Marga and myself to wade through a few yards to re-join the ramblers at Hogarth’s grave by the side of St Nicholas Church where some group members went inside to admire the interior. The current church dates from 1882-84 when most of the building except the tower was demolished and rebuilt at the expense of the brewer Henry Smith of the nearby Fuller, Smith and Turner brewery. We walked through Chiswick old cemetery to cross Burlington lane and into Chiswick House grounds. We had lunch (including mulled wine for a few of us) at the main café by Chiswick House followed by a wander around the grounds kindly led by Stephen who with Rochelle and Cathy had finally caught up with us! We completed our walk by leaving the grounds and under the subway back towards Chiswick Park Station. A very enjoyable pre-Xmas ramble.