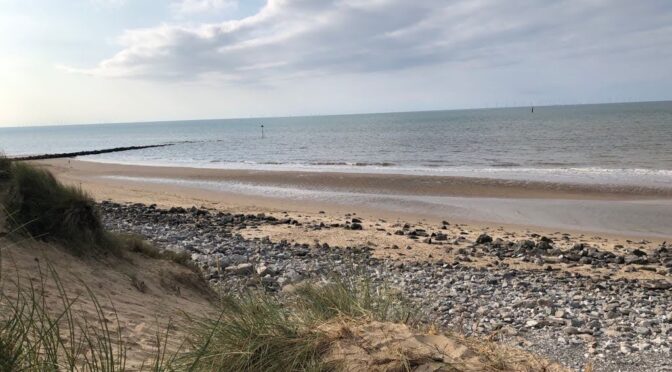 Twenty five participants took the 9.51 train to Flint in Wales. Here one Poly, unaware that we had arrived at the destination, was still in the toilet. The conductor very kindly kept the train waiting while we managed to call her and she got off just in time! We were met by two minibuses to take us to the start of our walk just before Mostyn. We were to follow the Wales Coast Path to Prestatyn. We climbed up through woods and after crossing a few fields descended through a pretty woodland gorge to Ffynnongroyw. We struggled with the pronunciation of the latter but were helped by a friendly local. At the bottom of the gorge we stopped outside the picturesque stone Garth Mill buildings. Several members played with two very friendly little dogs, one of which relieved itself on the leader’s rucksack while a group photo was being taken! Ffynnongroyw was built in the 1800s to house local miners and we could see numerous former chapels , a large parish church and terraced miners’ cottages.

After stopping at a pub for drinks we proceeded alongside the saltmarsh to Talacre beach at Point of Ayr, the northernmost point of mainland Wales. We passed various memorials to the Point of Ayr colliery, the last deep coal mine to close in Wales in 1996. The lighthouse at Point of Ayr on Talacre beach was built in 1777 to mark the treacherous entrance to the Dee estuary. It is no longer active, having been replaced by a lightship in 1883. We were very lucky to have good weather and picnicked on the beach near the dunes. The extensive sandy beach is popular with families but to the disappointment of at least one member it is too dangerous for swimming. After lunch we walked along the beach with some polys walking in the water. The beach gives way to saltmarsh and the path took us through Gronant Dunes, a nature reserve, to Barkby beach and the promenade at Prestatyn. Here the group split. At the point where the Offa’s Dyke Path meets the coast some turned inland to the station to return to Chester. Others remained for fish and chips in Prestatyn before returning. We all agreed that it had been an interesting walk with varied terrain and views and there were various comments on the bonus of a walk along the beach.

Susan (photos by Ida and Stuart)