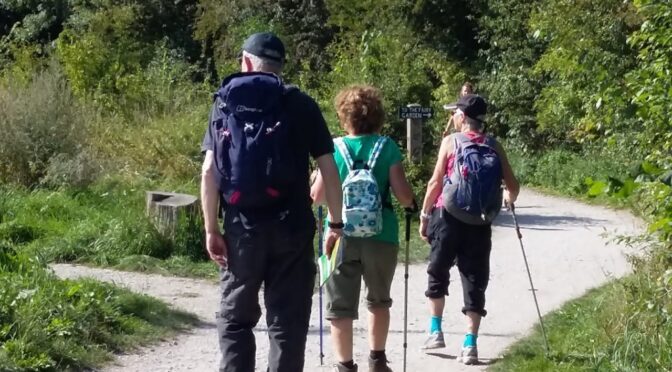 I had the privilege of leading this walk because Danny was injured. We caught a bus to the village of Neston where we joined the Wirral Way. After a few minutes working out which direction to take, we set off along the tree-lined embankments and cuttings of this disused railway line. We walked for a couple of miles and met many dogs and cyclists and then turned left down a road to the village of Parkgate on the Dee estuary.

Parkgate was once a port but silt in the Dee estuary made it unusable, as with Chester itself. During its time as a port there was much traffic with Ireland, and Handel landed there when returning from Dublin. The silting up caused the formation of extensive salt marshes and we now followed the estuary, first along a road and then on a narrow path. This path was surrounded by thick vegetation and at times one couldn’t see where to put one’s foot. A further difficulty arose in the form of boggy stretches which had to be carefully negotiated. Some of the party got wet feet and in one case lost their shoes, which fortunately they managed to retrieve. However we Strollers are used to tough conditions and we ploughed on until we reached open country and the Harp at Little Neston.
At the Harp we met Danny in the pub garden, where some had lunch while others sat on a grassy bank looking out over the salt marshes towards Wales and the power station at Connah’s Quay. We were told that occasionally, with a combination of wind and high tide, the water comes up to the pub. This brings lots of sightseers to the pub, and lots of rats from the salt marshes.

After lunch we left the Dee estuary and set off inland. We passed through the village of Ness, once the home of Emma Hamilton and our route led us through fields and lanes. At one place we met a herd of inquisitive cows in a field. They were in the field crowding round a gate and proved very popular with the Strollers. For the last stage of the walk we were back on the Wirral Way, which we left just before we reached our starting point, and were just in time to catch the hourly bus.

Although I was the nominal leader this was a team effort and I would like to thank Sunita and others who helped me with directions.