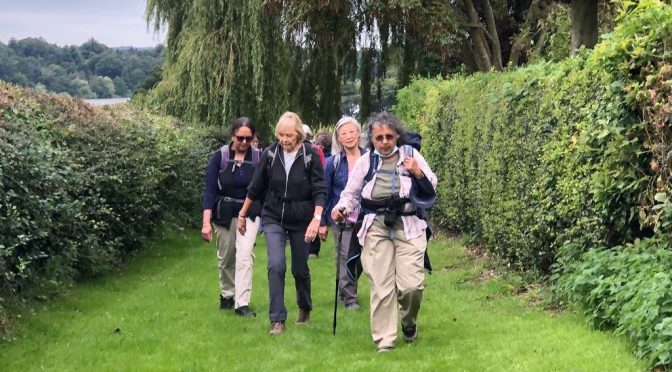 Strollers walk led by Judy – Chester outskirts
On Monday 30th August, the strollers set out to follow one of the walks in Danny’s book. The walk started at the stone cross in the centre of Chester, which marked the centre of the Roman fortress. We then proceeded down Bridge St and Lower Bridge St till we came to the river Dee. Turning right we walked along beside it and on to a part of the city walls. We came to Grosvenor Road and crossed the river on the Grosvenor  Bridge. It was, on construction, the longest single span stone arch bridge in the world, a title it kept for 30 years. It was opened in 1832 by Princess Victoria of Saxe Coburg Saalfeld and her daughter, the future Queen Victoria. Named after the Duke of Westminster, who owned property and land nearby. Following Eaton Road we entered the Duke’s Drive through some very impressive gates. There followed a very straight walk through woodland for a few kilometres. It was not particularly exciting, but quite pleasant . We eventually found our way back to the River Dee and turned back towards the city. At that point we stopped for a short break, where those of us who had brought sandwiches could eat them. Although the map in the book showed us a route following the river all the way round , we decided to cut across the Meadows. We re-entered the city across the Queen’s Park suspension bridge, where I released my charges, and hoped they had enjoyed their walk.
Judy

Twenty-seven hikers caught the train to Northwich. We made our way through the town centre, navigating a very large roundabout before entering the Northwich Community Woodlands. The majority of this is a reclaimed derelict area that now boasts a diverse array of natural habitats. We passed through Anderton nature Park which features rare wild flowers thriving on lime rich soil (a result of industry). We skirted along Newman’s Flashes an area of marshland popular with Bird watchers. We reached the Lion Salt Works where 21 of the hikers went into the museum. The Lion Salt Works is the last remaining open pan salt works, it closed in 1986. The museum contains an intriguing warren of stove, boiler and pan houses recreating the steamy and dangerous conditions where bare chested men toiled over great vats of the boiling brine. A representative of the museum gave us a fascinating talk on the social and industrial history of the area and demonstrated the Nodding Donkey Brine Pump.

We continued our walk between two meres and across fields of potatoes before reaching our lunch stop at the very pretty village of Great Budworth. We ate our picnic lunch in the church yard and enjoyed some liquid refreshment at the George and Dragon Pub. On leaving the pub we retraced our footsteps though the village following a road uphill to enter some woods and crossing some fields with a view of Budworth Mere. We walked a short way along a road before entering Marbury Country Park where a free music festival was taking place. We reached the Trent and Mersey Canal where we continued to the Anderton Boat Lift, some of the hikers enjoyed ice cream being sold by enterprising boaters. Unfortunately, the Anderton Boat Lift was closed but we did get a view of the lift before continuing our walk back to Northwich along a winding path following the river Weaver though Carey Park to reach Northwich Station.

Hilary (photos by Ida and Stuart