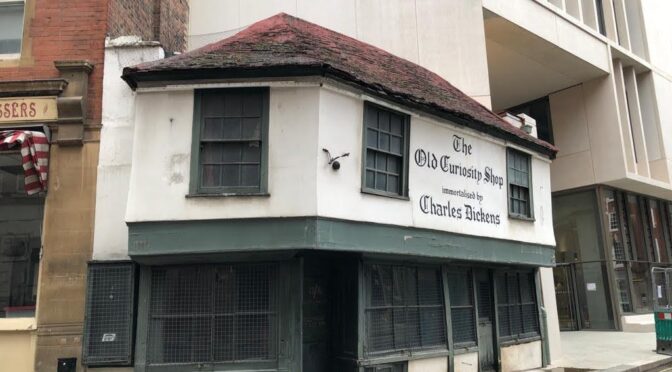 I was surprised and slightly alarmed when 30 people (23 Poly Ramblers and 7 guests) turned up at Westminster for my Charles Dickens walk on a mild but slightly drizzly Sunday morning.  Luckily the combination of Covid and the New Year weekend meant that London was quieter than usual and hopefully the large group was able to hear at least some of what I said.

The start of the walk at Westminster marked Dickens’ burial place in Poets Corner at Westminster Abbey in 1870 and one of his early jobs as a parliamentary reporter. We strolled up the north bank of the Thames, pausing briefly to admire the Battle of Britain monument and then through Victoria Embankment Gardens and Whitehall Gardens. On reaching Hungerford Bridge we paused near the site of Warren’s blacking factory, where Dickens was forced to work at the age of 12, his father having been imprisoned for debt at Marshalsea. We headed up Villiers Street, had a look at Buckingham Street where both Dickens and David Copperfield had lodgings, and continued to the Strand and Wellington Street. Dickens edited his magazine All the Year Round here and had a suite of private apartments.

We passed Covent Garden market which featured in many novels and then into Maiden Lane and Rules Restaurant. This began life as an oyster shop in 1798 and by Dickens time was the dining place of choice for the Victorian elite (and later for Edward VII and his mistresses). Someone remarked that the menu prices were not excessively high but sadly I hadn’t thought to book us all a table. We passed the second site of the Blacking Factory at Chandos Place where the young Dickens felt humiliated by having to work in the window in full view of passers by. On to Garrick Street and the Garrick Club. Dickens was a member and had a falling out with fellow member William Makepeace Thackeray who disapproved of Dickens’ mistresses and his cruel treatment of his wife.

We left Covent Garden via Floral Street and eventually crossed Kingsway to Lincolns Inn Fields. We passed a house which was the model for the home of the cunning lawyer Mr Tulkinghorn in Bleak House and paused to view the Old Curiosity Shop. In spite of the name it has no connection with Dickens. We passed Lincolns Inn, closed to the public at weekends, and then on to Carey Street (site of the Court for the Relief of Insolvent Debtors – an institution familiar to the Dickens family and several of his characters). We made a diversion to view a Victorian Pissoir in a side street (no known connection to Dickens) and then reached Chancery Lane, a street which features heavily in Bleak House.  We crossed High Holborn to Grays Inn where Dickens worked as a solicitor’s clerk (and which experience sowed the seeds of his dislike of the legal profession) and then to Doughty Street where he lived for 2 years in the late 1830s and wrote Oliver Twist and Nicholas Nickleby. The house is now a museum and happily for us the cafe was open and able to accommodate half the group. The rest of us decamped to the Postal museum cafe, found somewhere to eat a snack or baled out to Wetherspoons.  After lunch those remaining continued towards Farringdon pausing at some of the streets associated with Oliver Twist including Saffron Hill and Hatton Garden.

Gillian,  Thanks to Ida and Stuart for the photos