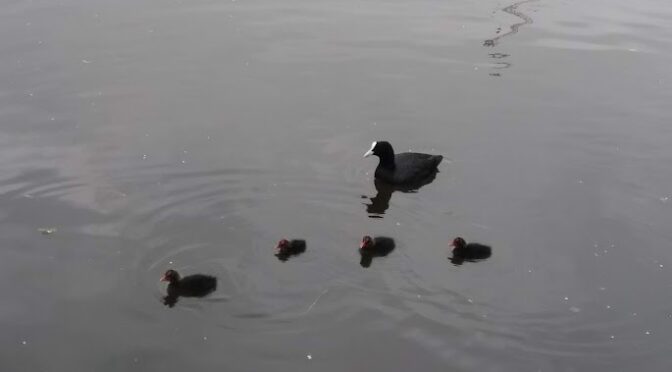 There was a group of 6 Poly Ramblers and myself who met outside West Drayton station on the day leaving around 10.15am. Unfortunately it was a wet and dismal day but nevertheless we did the walk there and back, rain not being so heavy although it did not brighten up until we finished it and ended up at my house for tea. One of the walkers cut the walk short at Hayes to get his train back but the rest of us continued to the end.

The walk was largely uneventful but I gave the background to the park which has no toilets and café facilities there as the council had demolished the old manor house which stood there around 1945 after the end of the last war as the council could not afford to keep it under repair. The old coach houses are still there and the clock above it and I told the group that lottery funding had been given during lockdown to refurbish the coach houses and cellars beneath and hopefully the toilets and café/visitor centre, which was all closed and neglected, would be reinstated. We were lucky to do the walk the day we did for as we entered the park the council had put a sign up saying the renovation works would start on 9th May and then there would be no access to that main part of the park where the seats, coach house site and other things were. We took our picnic lunch in the area on the seats in front of the coach houses. I told the group that during lockdown 2021 when I had done the first walkover an archaeology group had excavated the area near where we were sitting to find the remains of a former manor house there and had found historical remains going back to 17th century or earlier. This was the same group which has been excavating the grounds in Marble Hill House, Twickenham.

I showed the group where the community orchard still is and the placards showing the large number of different varieties of apples and pears. The blossom had largely fallen from most of the trees due to warm spring and now the rain. It was noted on these that the trees remaining now had been planted by someone in the community in 2003 but these replaced several earlier orchards going back as far as 17th century similar to the original remains found on excavation to find the earlier historic house.

We got back to my home around 4pm for tea and home-made fruit cake (delicious cake – Editor). Geoffrey and Chris  left the earliest to get back to West Drayton station where Geoffrey had parked his car  but Stuart, Gillian and Andrew  left to get back by bus and other routes.

By the time I arrived in Chesham, 24 Poly Ramblers had assembled for a walk, which was a good turnout for a winter walk. Some, like me, had arrived on a combination of the Chilterns Railways and Met Line and others had driven directly to Chesham the start point for our walk. We had three new members and a number of members we hadn’t seen for a long time so it was really nice to welcome them to the fold. It took us a while to set off because I had to confirm numbers of people who were going to be eating at the pub and then phone through their orders to the pub who wanted to have some notice to be prepared for us. I wasn’t expecting to have to do this, so this created a bit of stress for me. But after the briefing, we were ready to get going. It was a very bright sunny day perfect for walking!

END_OF_DOCUMENT_TOKEN_TO_BE_REPLACED 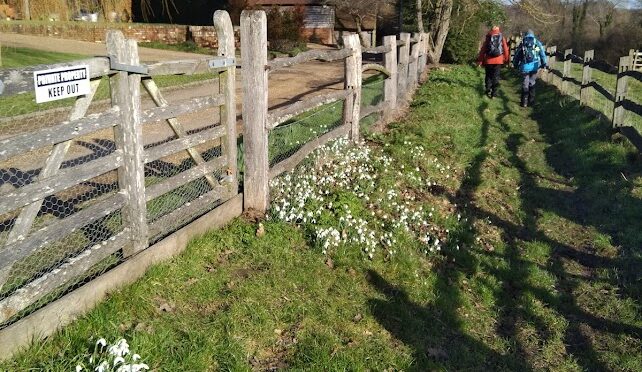 Despite the walk coming with a warning of unusual amounts of mud & waterlogging, 24 walkers gathered off the hourly – remember this detail- train, in the sun at Hever station, which is a long way from Hever village & is completely un-manned – remember this too!  I had the timings nicely worked out with time for a sandwich at Chiddingstone & a swift half in Bough Beech & back in time to catch the 16.05 train. However, we have a few prescient or maybe sensibly suspicious members who had checked & seen that the 16.05 train was cancelled so, having an extra hour, we set off at a more leisurely pace than usual. END_OF_DOCUMENT_TOKEN_TO_BE_REPLACED 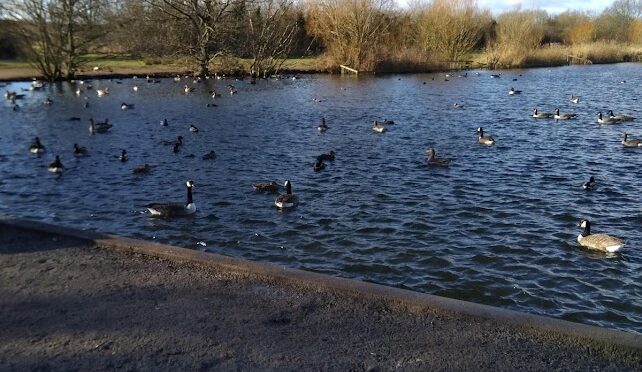 I arrived at Hornchurch around 9.50am on a glorious sunny morning. I did not see any Poly Ramblers; however it was not a surprise as there were issues with the Tube. I went for a stroll when Harriet called out from a café, The Sip House, that served speciality coffee. I was ready to sit down and enjoy the coffee when I remembered that we should meet the rest of the group at the station and was glad I had my drink in a take away container so I was able to enjoy my beverage.
On my return to the station I was astonished to see over twenty Poly Ramblers (24 in total). It was a long train journey for most of us so a few members were in need of refreshments and for many a comfort stop was much needed. Dave, the Station Master very kindly opened the toilets especially for us.
We set off for the walk some fifteen minutes later. It was not long before we were making our way through a really muddy patch. After the mud it was very pleasant and quiet walking to Berwick Glades and then onto Berwick Woods and its pond considering we were in zone 5.
We made our way to Hornchurch Country Park. This park contains the largest continuous freshwater reed beds in London, is designated as a site for Special Scientific Interest, was a former airfield and has a fascinating legacy of being used in both World Wars. We were able to see many of the remaining features which included pill boxes, Tett Turrets (see photo with demo from Chris) and aircraft dispersal bays. We went past Albyns Lake which was full of birds, to which we returned about half an hour later for our picnic lunch.
From the lake we continued to Ingrebourne Hill, a former sand and gravel quarry which had been filled with a range of materials including bricks, concrete and metal. We were able to enjoy splendid views of the London Skyline and the QE2 bridge from here, all at just 11 metres above sea level.
After lunch at Albyns Pond we walked past a dog memorial and the Airfield flightways and stopped at Ingrebourne Nature Reserve with its a small RAF museum for tea before returning to the station.
It would be well worth doing this walk in spring/summer to see appreciate the wildlife. 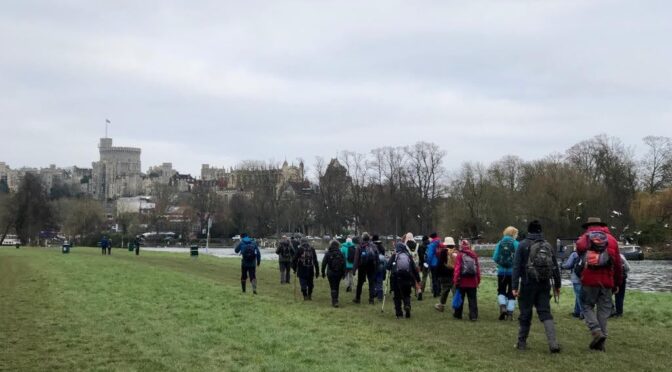 I met a group of Polyramblers including a new member, at Paddington station. We boarded the 1013 train, run by TfL, to the delight of freedompass holders who could enjoy a free ride to Slough. The train gathered up more of us en route, and outside the main entrance of Slough station, we all assembled with even more in the group who had travelled by other means. So we eventually set off with as many as 28 in the party. It was quite a cold day.

Our route took us across through several pedestrian crossings over the busy A4, then south along the Windsor road, where after some 200 yds we passed through a gateway and path into the cemetry of St Mary’s Parish Church. I considered giving a talk to the party here on the tarmac outside the church building, but changed my mind due
to the large size of the party.  So we carried on along Albert Street, Dachet Road, passing over the M4 and down onto a footpath via The Myrke taking us past rows of terraced houses and onto another footpath leading us into Agars Plough. END_OF_DOCUMENT_TOKEN_TO_BE_REPLACED