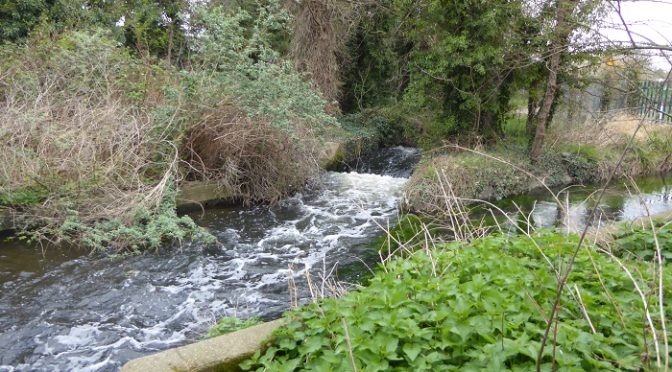 Rosie led twelve of us on this delightful leisurely walk from Carshalton Ponds and then beside the River Wandle in the spring sunshine, with cherry blossom,  blackthorn, daffodils, marsh marigolds in the shallow waters of the river, birds chirping and singing all the way. In places the water of the river was calm, in others there was a strong current and it was easy to imagine the 90 mills that were operating along the whole length of the river in its heyday.We came upon a young man wearing waders, standing in the water, up to his knees, patiently reeling in a big fish. From time to time we could see the fish in the water trying to disengage himself from the fisherman’s hook. Eventually the weary fish gave in and the fisherman scooped him gently into his net, removed the hook from his lip and held him up for all to see. His friend on the bank took a photo and told us it was a carp, probably weighing ten pounds! Then the fish was gently returned to the water and swam off. I wondered how often he had undergone such an experience!

Further along the river we were surprised to see a Little Egret paddling in the shallows. Where two branches of the river met, one calm and one churning, we sat on a wall to pause and enjoy the blue skies and warm air. There was hardly a breath of wind. In Ravensbury Park we saw five goslings sitting on the ledge at the edge of the river. Did they belong to the Canada geese in the river or the Egyptian goose which seemed to be guarding them? Just as well, because we hadn’t gone much further when we heard a goose quacking loudly and turned back to see a black dog near where the goslings had been. They had obviously taken the only option and jumped into the river, just in time!

The walk ended in Morden Hall Park, full of families enjoying pre-Mothers’ Day time in the sunshine. Many of them were playing on the grass but a lot of others were queuing in the tea rooms! Some of the group waited patiently for refreshments. Others made for the nearby tube station at the end of a very enjoyable and refreshing stroll. Thank you Rosie for a lovely day! Pam