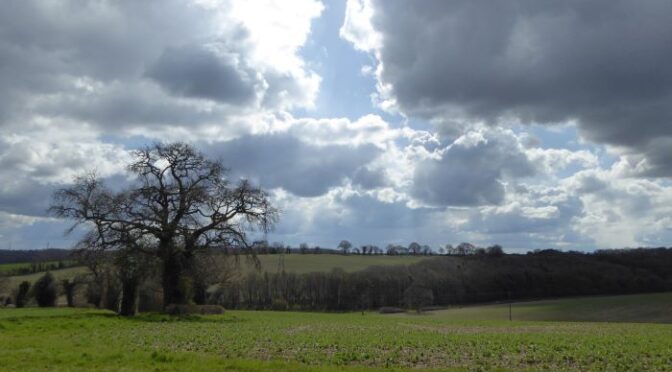 This was a substitute walk I had volunteered to lead at the last minute as the original leader was out of action due to COVID. Not having done a walkover I was hoping that the route was as straightforward as the Chilterns AONB leaflet suggested. On a sunny but chilly morning 15 Polys headed east out of the town on the Grand Union canal with the River Bulbourne, a chalk stream, flowing alongside. There were a few canal boats negotiating the locks but the towpath was quiet with little cycle traffic. After a couple of miles we left the canal and headed south, gently uphill on Sugar Lane. In the valley below the A41 came into view and hearing. According to my leaflet the Bourne Gutter, a usually dry tributary of the River Bulbourne has flowed in the valley nine times since the 19th century. Apparently its appearance heralds war and expensive bread, so we were surprised not to see it today. We crossed under the A41 and headed west along the valley past Bottom Farm. The lunch stop was a choice of a grassy bank or a wood. The timing was good as it allowed one member who had lost touch with the group to catch up before we realised he had gone. After lunch we walked through woods, crossed under the A41 again and made our way back into town via playing fields. We hit Berkhamsted high street and dispersed to the station and various tea shops.