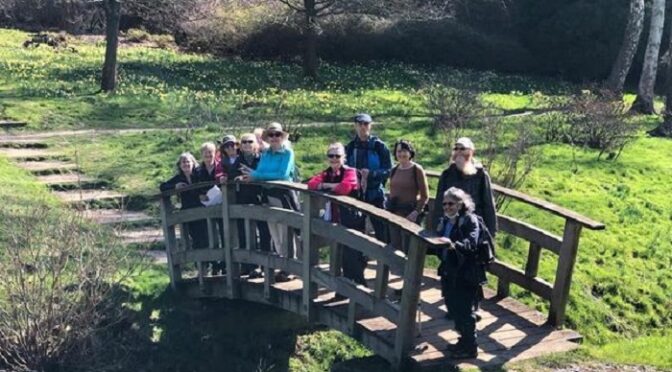 Twelve Poly Ramblers met at Sunningdale Station on a lovely warm day to begin our hike, a thirteenth member of the group joined us at our lunch stop at the Saville Garden restaurant having missed the rail replacement bus. We quickly encountered obstacles from a fallen tree at the start of our walk, negotiated with difficulty. After a pleasant walk though Cowarth Park we entered Windsor Great Park and made our way to Virginia Water Lake where we stopped for a tea break at a refreshment kiosk. We followed the sign posting to reach the Valley Gardens where we wended our way onwards attempting to follow somewhat complicated route instructions. The flowering Camellias and Azaleas were stunning. We crossed a bridge and walked though the open grass of Azalea valley, unfortunately going once again off our route, splitting into two parties. We managed to regroup by the stump of the giant Wellingtonia tree sadly cut down owing to disease. We headed towards the Totem Pole and continued on our route towards the Obelsisk Pond and our lunch stop at the Saville Garden Restaurant, where we enjoyed a leisurely picnic in the sunshine. After lunch we walked down the Rhododendron Drive towards the Cow Pond where we spotted Egyptian ducklings out with their parents. We went through a lightly wooded area and followed the path round towards the Royal Lodge before entering the Deer Park. At this point we deviated off the main route to explore the deer park spotting a large herd of deer in the distance. After re-joining the main route, we continued along the Long Walk till we finally reached the gates of Windsor Castle. We followed the route back towards Windsor Central Station for some and Eton and Windsor Riverside Station for others. A really enjoyable day out with lots of sunshine and blossom. Hilary 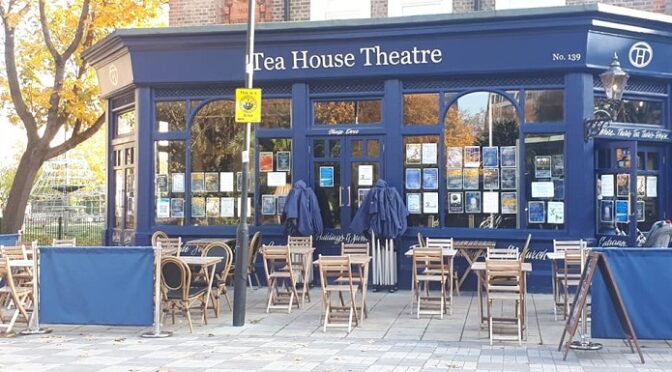 Ten Poly Ramblers met at Vauxhall Station on a cold day for the last walk of the year. We started in Vauxhall Pleasure gardens where, with the opening of Westminster Bridge in 1750, the aristocracy delighted in the musical temple orchestra and lamplit walks. We continued to the end of the gardens, continuing on the Vauxhall Walk turning into Lambeth High Street and crossing over the Lambeth Road to the Garden Museum housed in the former St Mary’s church. The museum has an abundance of garden memorabilia and a café which sadly was closed owing to staff sickness. The secretive ancient building next door is Lambeth Palace. We crossed Lambeth Bridge to turn into Victoria Tower Gardens alongside the Thames. At the end of the gardens, we paused to admire Rodans statue The Burghers of Calais before a café stop at the Jewel Tower at Danny’s suggestion. Geoffrey and I made use of our English Heritage membership with a visit to the top of the tower. END_OF_DOCUMENT_TOKEN_TO_BE_REPLACED 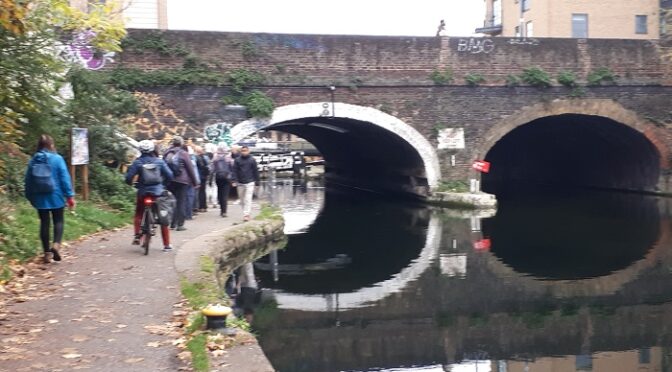 Twenty-two Poly ramblers met at the Angel station Islington, to begin our walk along the Regents Canal covering parts of North and East London. The Regent’s Canal is 8.6mls long and was completed in 1820, dozens of day trip boats, narrow boats and water cafes line this stretch of the canal. The towpath also proved to be very popular with cyclists and joggers just two of the potential hazards on our walk. Our route started with the Hanging Gardens of Islington, as the canal emerged from the tunnel under Islington. After about 5Km the towpath went alongside the edge of Victoria Park where we passed through Canal Gate to make our way to the Pavilion café via the beautiful lake with its Pagoda. Following our lunch, we made our way across the park to enter the Old English Rose Garden which surprisingly still had some roses in flower. Emerging from the Rose Garden we walked alongside a pond and crossed the main path to head for Lock House Gate and the Hertford Union Canal, also known as Duckett’s Cut. At just over a mile long, in the borough of Tower Hamlets, it connects the Regents Canal with the Lee navigation.  We left the canal by ascending steps to Grove Road to re-join the Regents Canal via a grassy bank. After a further 300 meters we approached Mile End Lock where a number of the group left to find a local hostelry, whilst the rest of us crossed the Green Bridge, affectionately known as the banana bridge, built to celebrate the Millennium and to overcome the conflict between Mile End Park and the traffic of the Mile End Road. We continued our route along the canal passing the Ragged School Museum, finally reaching Limehouse lock and our final destination the Yurt Café led by Cathy, highly recommended for its vegan cakes and drinks at a very reasonable price.

Hilary.  Photos by Hilary and Stuart 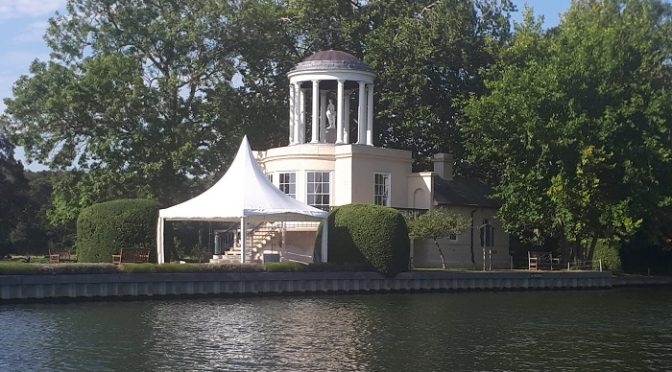 Thirteen Poly Ramblers took an early train from Paddington to reach Henley on Thames. The earlier time meant that we avoided a thronging high street whilst crossing busy roads to reach the start of our walk on the Oxfordshire way. We enjoyed stunning views in sunshine as we walked through Henley Park part of the Culdon Faw Estate. After walking up a narrow lane we entered a large field with a narrow path leading eventually to an access road. Sadly, we did not spy the very tame White Peacock that I came across during  my walk over. On reaching Dobson’s Lane we wended our way around several bends before stopping for our elevenses at the Church of St Mary the Virgin, Fawley. We continued our meander along the small country lane passing the village green where there was a well which Andrew initially thought was the Maharajas well, alas this was not to be! We continued our walk along a narrow bridle path before we entered the Great Wood following a bridleway track gently downhill as it meandered through the woods through bends and some sharp turns. We descended Reservoir Hill and went through further woodland with new plantations before finally reaching the picturesque village of Hambleden. We had a picnic lunch in the churchyard and some of us also had very tasty home-made cake at the local post office before making our way to the Stag and Huntsman joining a number of people having a barbeque. We were about to set off on the afternoon walk when Chris announced that he had lost his Freedom Pass, after re- tracing his steps it was handed to him at the pub where he had dropped it, a big thank you to the pub staff for their vigilance. We continued our walk across the meadows heading towards Hambleden locks where we saw the electrically operated locks opened to allow some very expensive boats through. We enjoyed a very pleasant further meander in lovely sunshine back to Henley passing the Henley festival with some very expensive Champagne on route. We were disappointed not to have time for the Chocolate Cafe to complete our walk however several of us did manage an ice cream on the walk back to the station. 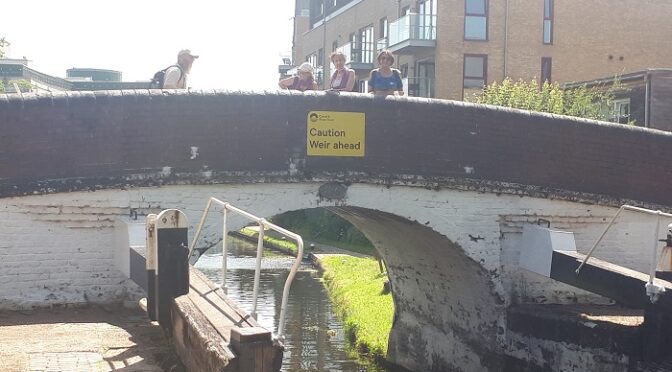 A walk along the Grand Union Canal starting from Val’s in West Drayton. It was one of the hottest days of the year, however we were fortunate to be rewarded by plenty of shade from trees planted along the canal. This part of the Grand Union Canal is quite varied, we passed Packet Boat Marina (from which Clive and I later hired a narrowboat with the family!). It is situated on the Slough Arm of the canal and near to the Little Britain Lake following the London Loop signs. At our half way mark we had lunch at the General Elliot pub situated by the side of the canal. In the afternoon we walked a short distance further towards Uxbridge and Denham before reaching a consensus that it was just too hot to venture further. We retraced our steps to enjoy tea and cake on the patio of Val’s house before getting a taxi back to West Drayton Station. Thank you Val for arranging a lovely walk and tea at your house. Hilary