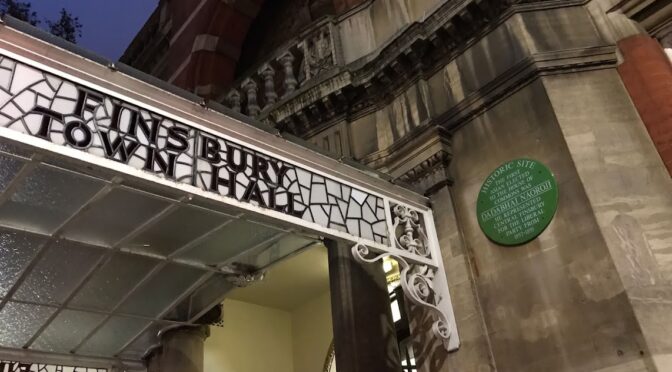 It had rained on and off all day and it was a blustery evening, so I did not expect many customers for my walk, but 7 stalwart Polyramblers, including Danny, turned up. We started by going north to trendy Islington High Street and Camden Passage, then turned right and right again to walk in gardens on top of the New River. After busy Pentonville Road, we turned into Claremont Square with the large mount of Claremont Square Reservoir in the middle to store water brought from Hertfordshire via the New River. We walked along Myddelton Square with its beautiful Georgian house before going to the viewing platform for the New River Head (there is not much to see but there is a lot to read). We passed Sadler’s Wells theatre, named after the well discovered in the garden of Mr Sadler, the laboratory building, the head office of the Metropolitan Water Board and Spa Gardens. We stopped to read a green plaque on old Finsbury Town Hall for Dadabhai Naoroji (the first Asian elected in the House of Commons) and, in Exmouth Market, a blue plaque for Joseph Grimaldi, the father of modern British Clowning. We did not go into Spa Fields as it was not lit and might be home to footpads (a highwayman operating on foot rather than riding a horse). We did a detour via the Michael Palin Centre for Stammering and the Finsbury Health Centre before reaching the London Metropolitan Archives. Then we followed Clerkenwell Close to arrive in Clerkenwell Green with the Karl Marx Memorial Library and the Old Middlesex Sessions House. Turnmill Street led us to Farringdon station, the end of the walk, but we headed straight to the Sir John Oldcastle for some sustenance. If you want to do the walk, the itinerary and information are here.