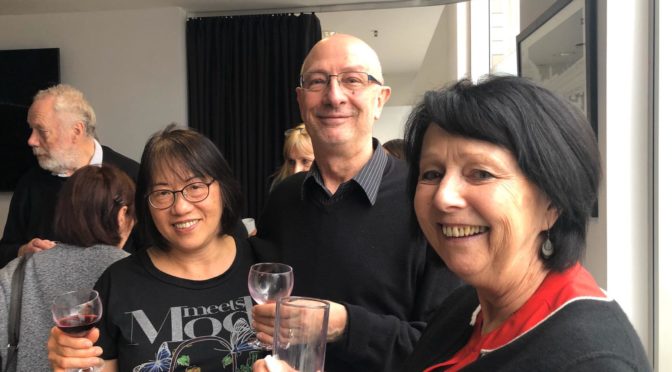 On Saturday 14 March, just ahead of the more stringent advice on social distancing, the Club held its AGM at Better Bankside.   With the increasing threat of coronavirus, the organisers had thought long and hard about whether to go ahead and email reminders had been sent out about the importance of hand washing, so I was expecting a much reduced attendance. In the event 36 members turned out, only two down on last year, and this in spite of a few older members sensibly deciding to stay at home to reduce their risk of infection. Perhaps we all had an inkling that would be our last physical gathering for a while.  Hilary, in the chair, began the meeting with tributes to Solvig Starborg who had died in January and Ian Gordon who had passed away last May.  Both had been AGM regulars.

Hilary reminded members that 2019 had been a very successful year for the club with a record number of new members, many of whom had become regular walkers. The regular business of the meeting included a presentation of the Rambler of the Year trophy
jointly to Pam and Gillian.  Danny informed members that the Club had made a £250 donation to the Chiltern Society to sponsor a gate in Wendover with an inscription in memory of Peter Gould. The existing officers and committee were re-elected for the third year running and the meeting agreed that Shirley Hafey should be elected an Honorary Member  in recognition of her contribution to the life of the Club.  It was also suggested that the Club should make a donation to Global Generation, a local charity operating in London which we had visited on a recent walk.  At the end of meeting Pam unveiled the new Rambler of the Year Cup, available to be won in 2020.

The venue hire and refreshments this year had been generously funded by Martin Gill in honour of a special birthday.  We thanked him with a large cake (I hope he wasn’t trying to keep his age secret)!

Sadly we won’t be able to meet again in person for some time but online contact through the Poly Social Group on WhatsApp is going strong.  All the very best to members and their families in the coming weeks.