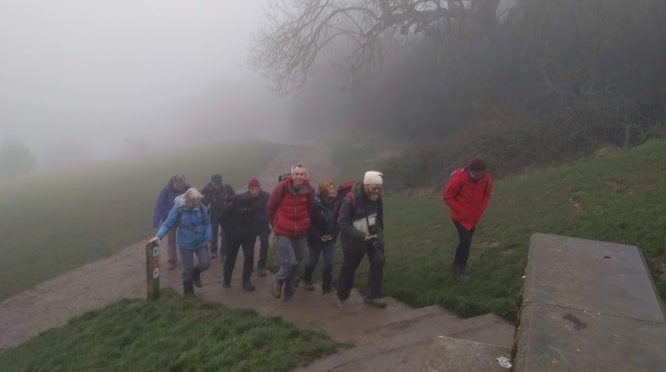 A walk of two halves on Saturday.  Fifteen Poly Ramblers, led by Harriet, alighted at Box Hill and Westhumble station along with several other walking groups.  We headed towards the stepping stones over the River Mole, but only Stuart and Chris were game to cross them as the river was quite high, the rest of the group opting for the bridge.  Then we had to tackle Box Hill itself, a long series of steep steps.  At the top we were rewarded by ……. zero visibility due to the mist.  A little later we tackled White Hill, a long series of even steeper steps.  For there it was level and then downhill to Mickleham.

We all managed to get fed at the Running Horses, which was very cheery although busy.  We had done all the hard work in the morning and it was a gentle 75 minute stroll to Leatherhead along the River Mole.  The river showed signs of recent flooding but luckily the path was clear.  We stopped on the town bridge to admire two swans and a cygnet. Thanks to Harriet for a very nice walk.