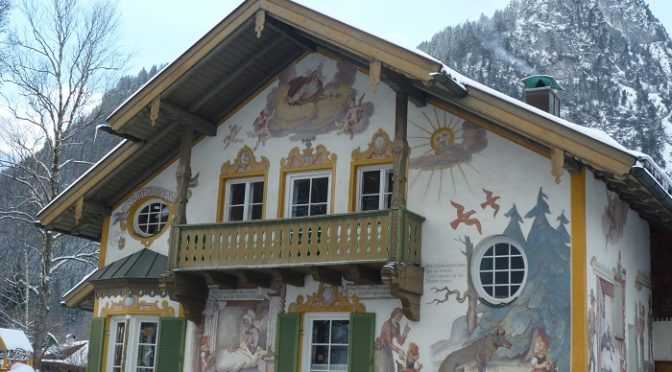 Although we travelled on Friday 13 to Oberammergau, it was a very smooth journey by plane and train via Munich. After settling in our hotels we did an exploratory walk as night was falling and drank our first gluhwein/beer. Meal in the hotel and off to bed.
After a nice breakfast – and discovering that the hotel has 2 cats -we set off to walk the Altherrenweg, a trail with panoramic views which follows the Ammer valley. We saw a black squirrel and a hare. Wehad lunch at Gasthaus Stern in Unterammergau before returning to Oberammergau, following the river Ammer while the snow fell. The Amblers went back to Oberammergau by bus. Once back from our 8 mile walk, options included visit of the interesting museum, shopping or swimming. Dinner was at Gasthof zur Rose.
On Sunday, we could see some blue sky when we started our walk, passing beautifully decorated houses. We walked along the river Ammer for a short while and then followed a country road through the Weidmoss nature reserve. We continued on a path with a forest on one side and fields covered in snow on the other side. The Amblers took the bus to Graswang and walked to Linderhof. We reached Graswang where we had a light lunch consisting of dessert and jäger tee or gluhwein. A wide path which started flat and then gradually climbed through the forest took us to Linderhof castle in a heavy snow shower. We had a guided tour of the castle in English. The rooms, inspired by the castle in Versailles, were richly decorated with sculptures covered in gold leaves. Although the heating system was very advanced for its time when King Ludwig lived there, we felt colder in the castle than outside. After our visit, we went to the nearest and only cafe for cups of hot chocolate. We went back to Oberammergau by bus and met later for our last dinner, followed by schnapps in the local bar (for some).
More snow had fallen during the night and continued to fall after breakfast so it was decided that, instead of taking the cable car to the summit of Laber where there would be no view, we would walk to Ettal. The Amblers decided to go on the cable car for the experience and had a drink in the café at the top of Laber. For the ramblers, it was a lovely walk along the river Ammer with pristinely white fields and trees covered in snow. Once in Ettal, we went into the abbey shop and the baroque church and then had a hot drink while we waited for the bus to take us back to Oberammergau. Then it was time to leave Bavaria to return to London.

Another really enjoyable trip to enchanting snow-covered Bavaria.  Thanks to Dominique for organising