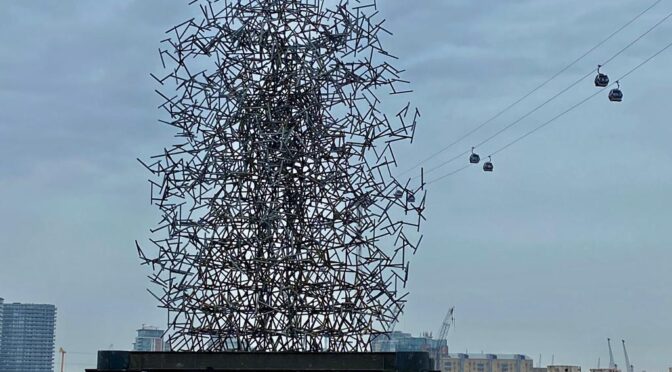 On a rather grey Sunday morning, a very respectable turn-out of twenty-five members met at Stratford Station for the walk with a further two joining enroute. The Line is London’s first dedicated public art walk. It starts in the Queen Elizabeth Olympic Park and that’s where the group joined it, alongside the Waterworks River. The first of twenty exhibits was the AccelorMittal Orbit by Anish Kapoor, then its slide by Carsten Holler followed by a series of Madge Gill works under a railway bridge. Soon after, we reached the Greenway with a distinct aroma signalling the Northern Outfall Sewer beneath! After crossing Stratford High Street, we joined the Three Mills Wall River towpath with a tall structure in the style of the 2012 Olympic torch on the opposite bank. The next bit of art was a young woman in silicone bronze holding a mobile phone, followed by another Madge Gill work and a distinctive weathervane in the Three Mills complex. A Tracy Emin work consisting of five bronze birds on high poles was passed enroute to the River Lea towpath with a tower of supermarket trolleys heralding our arrival at Cody Dock for our lunch. The Dock was built in 1871 for unloading coal but it is now a creative industries quarter with community gardens and an excellent cafe. The next legs of the Line consisted of a ride on the Docklands Light Railway followed by a trip on the cable car high above the Thames. Finally, six art works around the perimeter of the 02 Arena, including a piece by Anthony Gormley, completed our walk accompanied by a persistent drizzle for much of it. A few of us then ‘dried out’ in a nearby Wetherspoons!