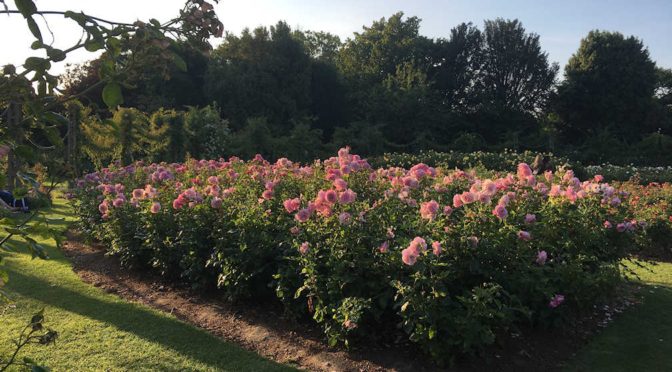 The Regent’s Park, one of the 8 Royal Parks, was designed by John Nash and cover 395 acres but we  stayed mainly around Queen Mary’s Gardens as well as the Avenue gardens.  It was a hot evening and the gardens were busy with people relaxing on the grass or having picnics.  Only 9 Polyramblers on the walk; perhaps people were scared of the heat but it was cooler in the gardens. We entered the park by York Gate and followed a branch of the lake along which a few herons were relaxing.  We passed the bandstand and admired the colourful flower beds.  We then went into Queen Mary’s Garden, named after the wife of King George V. We made several stops to admire the borders; the delphinium borders were no longer at their best but the other flowerbeds were beautiful; we also saw, the boy and frog statue and the triton fountain. After the Jubilee Gates, which were installed to mark the Silver Jubilee of King George V, we made a detour via a small Japanese garden and reached the beautiful rose garden. We did not smell each of the 85 varieties of roses but we gave it a good try. Disappointingly, their smell was very mild.  We then went to the secret garden, the lovely St John’s Lodge Gardens. Too bad for those not on the walk; we won’t tell you how to find it. We ended the walk in the Avenue Gardens where Frieze Sculpture 2017 had just started.