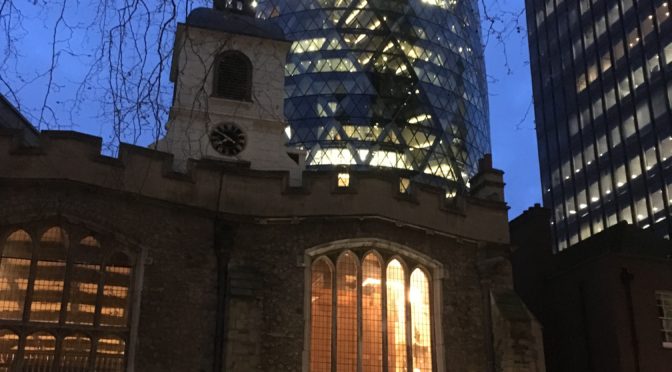 This walk in the Square Mile was a mixture of the old and the new with contemporary sculptures among modern office buildings such as the Gherkin and the Cheesegrater and older landmarks like St Helens Bishopsgate, St Botolphs and Leadenhall Market. We met outside Liverpool Street station on a chilly evening; 20 of us. I handed out an information sheet with explanations about each sculpture – to avoid questions I would have been unable to answer – and I was glad to see that these were read carefully. The 13 sculptures (some have been removed; there were 17 originally) from international renowned artists were varied and interesting but some of the explanations did nothing to enlighten me. We started by ‘Ajar’, a half open door within a frame on the lawn of St Botolphs but the group was soon distracted by the lovely Church Hall. And we also made a small detour to see the Victorian Bath House which is now an event space. We saw most of the Cadenetas by Lizi Sanchez – they are paper chains and, being small, were difficult to find on the recce. The Fire Walker by William Kentridge & Gerhard Marx showed a street vendor carrying a burning brazier on her head and had to be admired from afar because, close by, the different pieces that made up the sculpture did not resemble anything. Laura, a large cast iron head by Jaume Plensa, was admired as were ‘Florian’ and ‘Kevin’, Sarah Lucas’s giant bronze marrows. The light in Mat Collishaw’s magic lantern came on for us to admire the moths inside. The evening ended, for some of us, in the Crosse Keys. It is the sixth year that Sculpture in the City is organised by the City of London Corporation. Look out for the 2017 edition which should be in place from the end of June.