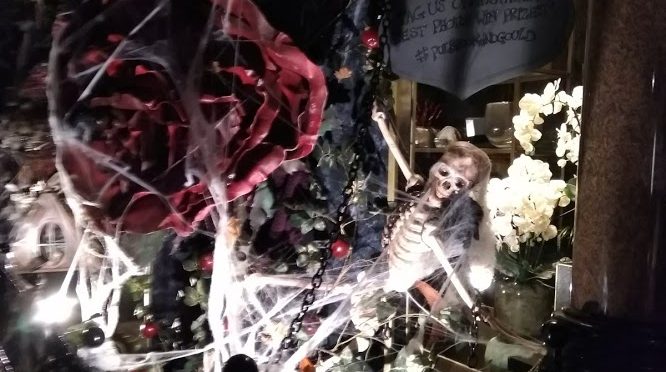 12 Polyramblers on this walk, or 13 if you count Stuart who missed the beginning of the walk and only found us at the end. But there could have been 15 as Mary and Joyanna did not find the group and went exploring on their own. The Grosvenor family has owned 100 acres of Mayfair since 1677 when Sir Thomas Grosvenor married Mary Davies, heiress to part of the Manor of Ebury. This area took its name from the May Fair – an annual two week long fair of vice and impurities, held until well into the 19 century. The walk took us away from busy Marble Arch and Oxford Street to quiet streets lined with beautiful 18 and 19 century houses and mews for their stables and servants. We passed Grosvenor Square, the second largest square in London and went to South Audley Street where the Halloween decorations outside the Thomas Goode shop were amazing. Mount Street has lovely houses with terracotta decorations. We also saw, outside Number 2 the ornate lamp post with a trap door which was used by the Soviet Embassy as a dead letter drop during had Cold War. This was revealed when a double agent was extracted from Russia. We followed Bourdon Street, Avery Row and a maze of narrow lanes before reaching Brown Hart Gardens, built on top of an electricity transformer station. In the middle of Mayfair are model dwellings built in the 19th century to house the poor which must be worth a lot of money now. We passed Claridge’s Hotel, went up Davies Street and finished the walk at Bond Street Station.