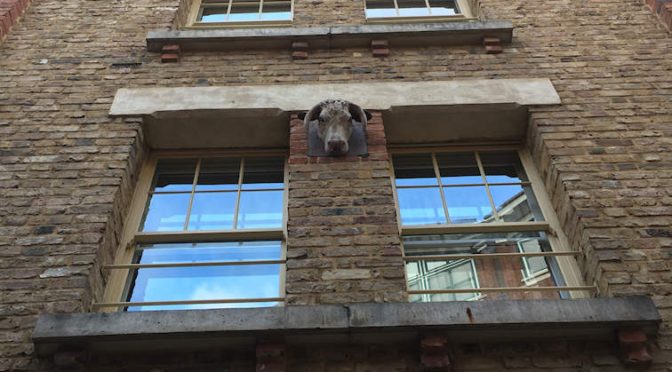 17 walkers for this London walk on a lovely summer evening starting from Farringdon, one of the earliest stations to be completed (1863). We made our way to the Clerk’s Well which was rediscovered in 1924 during building work. The walk then took us to the Sessions House – which is now a Masonic Hall, the Marx Memorial Library (it was originally an 18th century school for poor Welsh children and later was the home of ’20th Century Press’ where Lenin published), the old Hugh Myddleton School (named after the founder of the New River Company and the previous site of three prisons) and the Metropolitan Archives before crossing Spa Fields. Spa Fields were pleasure garden since the 17th century bull-baiting, fairs and gurning contests took place there.  The gardens had a bad reputation and theatregoers to Sadler’s Wells paid to be escorted through – but we did not have to do that.  Spa Fields was also the site of a notorious burial ground; in 50 years from 1780 about 8000 bodies were buried in the tiny space.  After a petition to Parliament burials were finally stopped.  Before going through Exmouth Market, we stopped at Our Most Holly Redeemer of Clerkenwell church, an Italian ‘basilica’ style church. We walked past Finsbury Town Hall, the old offices of the New River Company, the Finsbury Library and museum (the museum is open 10-5 except Wednesdays, Sundays and public holidays), the Finsbury Savings Bank and the Clerkenwell Medical Mission. We continued to St John’s Square which covers both sides of the Clerkenwell Road and was once the site of the medieval St John’s Priory.  On one side of the square is the  priory church with its 12th century crypt.  It is part of the Museum of the Order of St John on the other side of the road.  On the other side, is the Gateway built in 1504 which hosts the lovely Museum of the Order of St John (free; they also organise very interesting guided tours). Before returning to Farringdon, we went through Passing Alley (previously Pissing Alley). A few of us went for a meal at the local Weatherspoon pub to finish the evening.