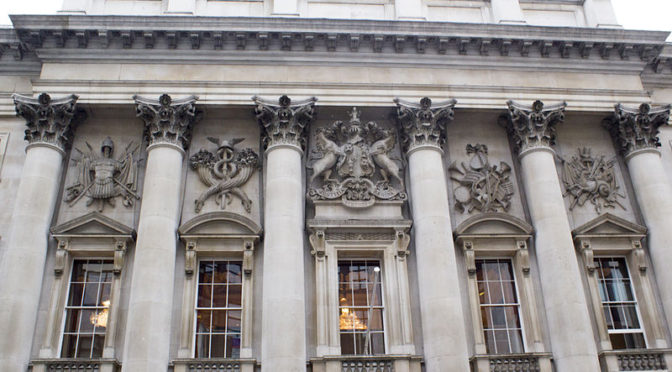 15 Polyramblers started from Blackfriars station on a warm, sunny evening, more like summer than April. There are 110 livery companies of the City of London and 39 of them maintain their sometimes elaborate and historic halls.  Many were destroyed in the Great London Fire of 1666 and during the Blitz and have been rebuilt 2 or 3 times.  We took in some of the halls starting with the Apothecaries, the Stationers and Newspaper Makers (Grade 1 listed building), Cutlers – with a frieze depicting the work of a cutler – and Haberdashers. We walked along streets with interesting names such as Ave Maria Lane and Amen Corner or full of history such as Giltspur Street with the Golden Boy of Pye Corner and West Smithfield with its memorial to Sir William Wallace. We also made a small detour via St Bartholomew the Great, London’s oldest surviving church. We continued along the maze of old City streets and passed Founders Hall, the Farmers and Fletchers, the Information Technologists who have the first new livery hall to open in the City for over 50 years. Then came the Pewterers, the Wax Chandlers, the Goldsmiths who still operate the Assay Office and test the coinage of the realm annually through the Trial of the Pyx.  We went by the Saddlers, the Insurers, the Brewers (1), the Girdlers, the Armourers and Brasiers, the Carpenters, the Furniture Makers and finally the Drapers. The full title of the Drapers’ Company is “The Master and Wardens and Brethren and Sisters of the Guild or Fraternity of the Blessed Mary the Virgin of the Mystery of Drapers of the City of London”. The livery companies have fascinating histories and many of the halls are interesting and beautiful buildings worth exploring on Open House London in September.