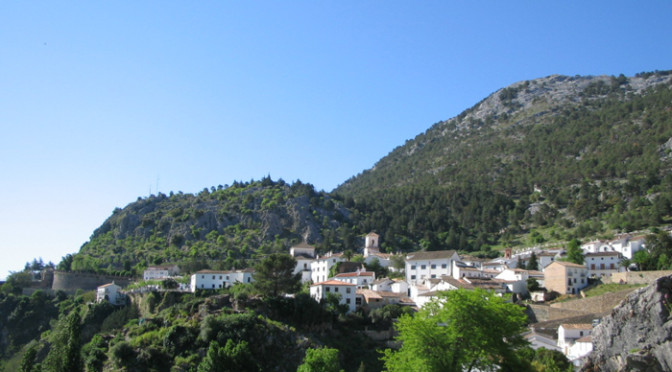 A group of 19 of us went to Grazalema in Andalucia, in early June. The journey there had gone OK but it was with great relief that we stepped down from the coach in the main square of this attractive mountain village. We checked into our hotel, La Casa de las Piedras, and took a turn round the village, enjoying the extensive views .  The weather was pleasantly warm and we had a leisurely group meal at the Restaurant Simancon sitting outside at a long table. There were geckos on the walls and birds swooping to catch insects. London seemed a long way away. 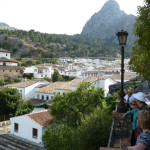 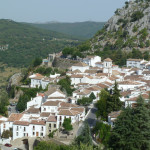 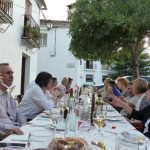 We also met up with Clive Muir, our website designer who lives in the village. He is one half of Wildside Holidays, of which more later.

On Saturday, we all took a coach to Montejaque, with a choice of longer and shorter walking routes back to Grazalema. There were 13 of us on the longer walk.

Sandra writes; I particularly enjoyed our first day’s walk , with Sue Eatock, the other half of Wildside Holidays, as our guide. Her knowledge of animal and plant life made it a special day.  She took us on a scorpion hunt, told us about cork making on our way through groves of cork oak trees and provided refreshments in her garden at the end of the walk, where we had a chance to view her collection of photographs. We learned that Spain is now the largest producer of cork. A cork tree will be 35 years old before its first harvest, after which it will be harvested every 9 years to prevent damage to the tree.Cork is the tree’s natural defence to forest fires so the ground must be cleared around the tree before each harvest to minimise the risk. Although most of us associate cork with wine bottles, it does in fact have many uses and is an ancient and valuable industry. 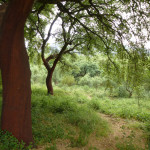 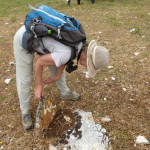 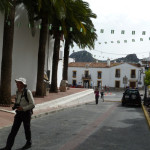 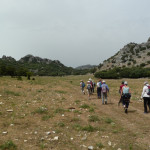 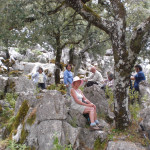 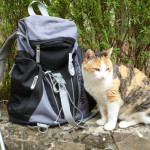 On Sunday, the road outside our hotel was being prepared for the celebration of Corpus Cristi. So impressed were the group with Sue’s guiding that the majority of the group opted for the shorter walk, which Clive led. He took 13 of them on one of the classic Grazalema day walks, via Puerto del Boyar and the Endrinal. I had the easier task of leading a select group of six to Villaluengua via  Charca Verde.  There had been an unusually hot spell in May, and Sue informed us that the summer was advance by a couple of weeks. Our route took us along the shady east side of the mountain called Reloj through cool pine forest and there were still plenty of flowers about. We had a deadline to meet of the 3.45 bus from Villalengua but we achieved this with something to spare, having time for a beer in the bar situated conveniently by the bus stop. Rural buses in Spain are much superior to our own,  and we were quickly whisked in air conditioned comfort back to Grazalema. Alighting in the main square, we found the other group were well ensconced under cafe umbrellas. 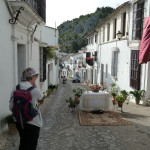 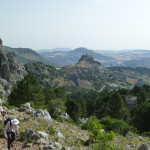 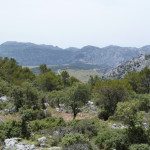 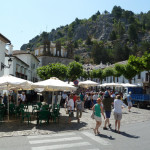 On Monday the long walk was in the region of Zahara. Our coach took us on the twisting road over the Puerto de las Palomas where we stopped briefly. To the north we could see the Garganta Verde, home of a large colony of gryphon vultures which would see from the other side later.

Ann, who had come all the way from Vancouver to be with us writes; I had done the short walks on the previous days and felt I might be up to a longer walk. It was a lovely combination of bushy walking and open areas with great vistas. The ascent into Zahara was rewarded with, what appeared to be a holiday celebration of families in the town centre. They take Corpus Cristi seriously here, the festivities running over two days. The cobbles had been covered with hay and there were men zapping hand made grass whips. Everything was very festive and families all laughing and well… just celebrating life. (We saw people of differing generations speaking to one another and not a mobile phone in sight).I thought walking up to the fort might be a bit too much but, after a relaxing stop for a beverage, we all made it to the top and enjoyed the great views. I want to thank the Polyramblers for being so welcoming. 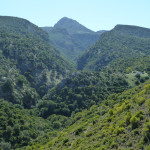 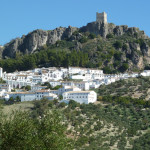 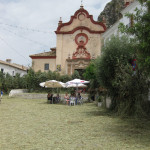 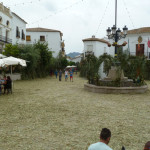 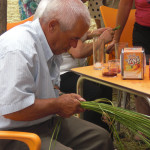 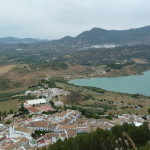 On Tuesday, our coach dropped 16 of us off at Estacion de Benjoan from where we walked into Ronda. It’s an undulating walk with fine open views, but this day it was pushing 35 degrees so it was with some relief that we reached Ronda with its shady squares. We  had 3 hours or so to look round this historic city with its spectacular gorge, before taking the service bus back to Grazalema and a final group meal in the patio of the Casa de las Piedras. 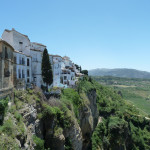 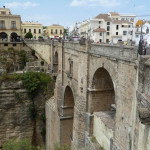 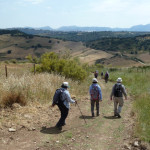 And all too soon, it was time to go home. There was some trepidation as we got on our coach as there was a strike planned by Spanish air traffic control. Fortunately, our party was not significantly delayed.

Hilary writes; I have attached a couple of pictures which for me epitomises  the feel of the local area which I loved. I particularly enjoyed the celebrations for Corpus Christi with the line up of boys waiting to show their prowess with the rush whips! I also loved the abundance of fruit and nut trees and unusual insects and flowers and fauna. The picture of us all relaxing at a picnic spot on Sue’s walk makes me wish that we may have a return visit before too long!

Moira, my sister in law from Vancouver has the last word: One of my favourite memories of Grazelema is about eating rather than walking ! I will never forget walking down to the restaurant on our first night where we were to have dinner. Coming round the corner into the square and spotting the tables set up under the trees with the lanterns was magical. Food and company were excellent. It was fascinating to experience names on a list become real people as I got to know the other members of our group. I feel privileged to have been included. 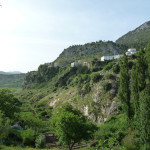 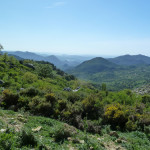