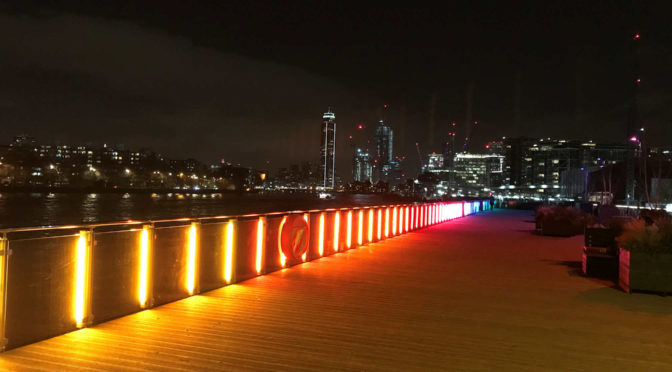 17 Polyramblers for this evening walk starting from Sloane Square. We passed the Duke of York’s Headquarters, built to provide a home for children of soldiers’ widows, which is now the home of the Saatchi Gallery and where the Tutankhamun exhibition is taking place. Then we continued to the Royal Hospital Chelsea, built by Christopher Wren. None of the Polyramblers meet the criteria to live there. There are carol services in the Wren Chapel in December so guess where we are going at the end of this year!  We learnt from Anna that Margaret Thatcher and her husband are buried in the graveyard. Next were the Chelsea Barracks with their new, exclusive, luxurious developments and the Garrison Chapel.  On the way to the Barracks, Stuart rescued a damsel in distress who had dropped her mobile in a drain while running for the bus.  Who knew that Australians were so chivalrous!

We then followed the very short Grosvenor Canal which remained in use until 1995 making it the last canal in London to operate commercially.  It is now surrounded by new developments.  We crossed Chelsea Bridge and made our way to Battersea Power Station. We stopped in the interesting visitor centre to warm up and learn about the power station’s history.  We then viewed the four light festival installations. We were not impressed by the first one but quite liked the Talking Heads, the Eternal Sundown and pressing the buttons of Action Reaction. Then, we all caught the bus to our different destinations.