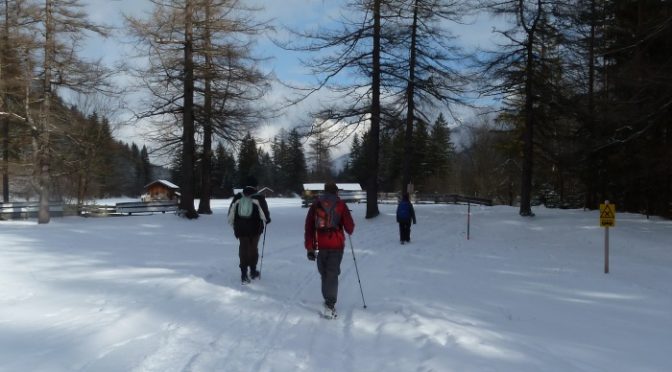 Friday.  A small and bijou group this year with only 6 participants. We flew to Innsbruck with BA and took a bus to the station. After some dithering about lunch in Innsbruck or Scharnitz, we decided to take the train and make our way to Scharnitz. This train journey is very scenic. We checked in our B&B, Gastehaus Frankenhof, and then had lunch in Gasthof Risserhof, where we received a warm welcome from the owner. She told us snow was expected during the night. We did a short walk around Scharnitz and went back to the B&B for a rest. 7.00 was time for a pre-dinner drink in Dominique and Sunita’s flat. Dinner was in Gasthof Risserhof, the only hotel in the village but a substantial establishment. There was a formal dinner in the next room for about 100 firemen, in their full  uniforms. No wives seemed to be allowed but apart from some loosening of ties, it was a very  orderly event.

Saturday . The owner of the Gasthof Risserhof was right; it had snowed during the night and the scenery was transformed. After breakfast, we took the bus (free with the guest card) to Seefeld. We followed part of the Way of the Cross to the 14th station before starting our walk to Mosern. There was a cross-country skying race taking place on the piste along the path and we could see the skiers zooming along. It seemed like hard work. It was part of the Winter World Master Games (winter sports festival for over 30s). We made a small detour to Mosern lake which was frozen solid and went in search of a place to have lunch. We were advised to go to Dorfkrug where we had a very nice light lunch. Danny was determined to do a free trip on the chairlift in Leutasch (courtesy of the guest card) so he left us to take the bus. 5 of us continued our walk along the high altitude trail back to Seefeld. We walked an extra half-hour because the leader did not read the instructions properly – but we saw the Wildmoosalm and more cross-country skiers. We arrived back in Seefeld at the same time as Danny and dived into a coffee and cake shop that the leader had seen earlier. We went back to Scharnitz by train and to our B&B for a rest. Pre-dinner drinks in our flat before going to the Alte Muhle for a pizza. Danny had a currywurst pizza.

Sunday.  It was snowing when we woke up and, after breakfast, we left our B&B and made our way to the river Isar which we followed for a short while and went up to the Porta Claudia and down again. We followed a lovely track through a pine forest for a few kilometres. As we walked, the snow stopped and the sun came out. When we arrived near Mittenwald, Danny and Sunita continued to the town along the flat path while the rest of us decided to be more adventurous. We followed a very steep uphill path which had not been cleared and, after a while, we arrived at a bar/restaurant with a beautiful view and tables in the sunshine. We could not resist and had a drink before continuing along a narrow path to the Geister Gorge. The scenery was spectacular with the gorge covered in snow, the river at the bottom and the metal bridge and walkways. We went back down to the valley along a narrow zigzagging path and made our way to Mittenwald in a snow shower. We met Sunita and Danny in the brewery where they had been waiting for us. We stopped there for lunch and Danny left us to do a trip on the local bus. We went into the centre of Mittenwald – where we had stayed on a previous snow-walking trip- to see the beautifully painted houses and shops. Then we walked in the wrong direction and it took us a while to get out of town. By that time, it was quite late so we decided to follow a path by the river which would be shorter. However, it had not been cleared and walking in the deep snow was quite exhausting. We finally arrived back in Scharnitz in the dark in a snow shower. After a rest, we had the usual gathering for a pre-dinner drink which consisted of Prosecco and then hazelnut schnapps. Dinner was in Gasthof Risserhof served by our waitress, Katia, who was quite entertaining.

Monday. We woke up with a beautiful blue sky and, after packing and breakfast, we went for a last walk in the snow. We followed the river Isar for a while and crossed it to go uphill on a forest track walking over tyre tracks to make our walking easier. After a while we had to turn left and follow footprints – which was a bit more difficult in deep snow – and reached the small Birzelkapelle, the aim of our walk. We had gone up and had to go down – which was a bit tricky on a steep path covered in snow. We all managed it, some on their backside. We reached the river Isar again and went to Gasthof Risserhof where Danny was welcomed like a long-lost friend by our friendly waitress Katia. While we were eating, a group of 20 English walkers came in. We learnt that they come to Seefeld for a week’s holiday every year. Too soon, it was time to pick up our luggage from our very nice B&B and make our way to Munich airport with a short stop in Mittenwald for a drink. Another successful January weekend. Next year, the plan is to go to Ruhpolding but, who knows…..