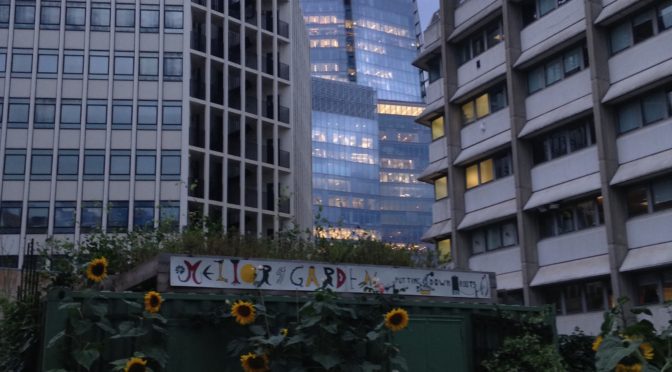 On a nice summer’s evening, 16 Polyramblers went to explore Bermondsey, the site of Bermondsey Abbey founded in the 8th century and, later, the centre of the leather trade and tanneries. We started with Bermondsey Street with its mixture of old and new buildings. Mary pointed out number 78 where her mother used to work. We continued to St Mary Magdalen church where there is a memorial to Susanna Wood. The carving is eroded but the wording says: “who after a long and painful illness which she bore with the greatest fortitude departed this life the 16th of June 1810 in the 58th year of her age. She was tapped 97 times and had 461 gallons of water taken from her without ever lamenting her case or fearing the operation”. Brave woman. We crossed the churchyard and Tower Bridge Road and went into Grange Walk, where number 7 incorporates the remains of the east gatehouse of the Abbey, then Neckinger which was the site of the Neckinger stream , a tributary of the Thames. We passed the old Central Library which Mary used to frequent and which is now a Buddhist and meditation centre. Half the group disappeared into the building to have a look, use the facilities and perhaps, in Mary’s case, to return a book. We then went into a park that used to be the site of Bermondsey Spa, passed the former Alaska Factory which was the premises of Martin’s the fur merchants. We walked to Bermondsey Square where the Antiques Market is held at dawn on Fridays, Bermondsey Street again and Leathermarket Gardens. By that time, most of the group – which had walked 2 miles in 2 hours – rebelled and went into a pub for a drink and something to eat. The walk continued into Snowsfields with its flats provided by the Guinness Trust and an old Mission building and Ragged School; we then went into Melior Street and stopped to admire the garden and its many sunflowers in the shade of the Shard.