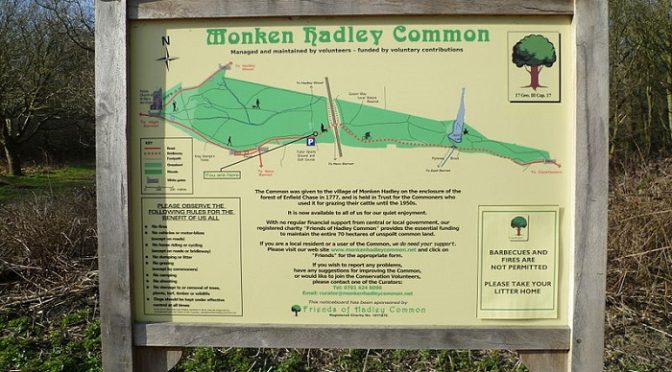 It was a bitingly cold and damp morning.  Not the sort of morning to entice most people out walking but Polyramblers are made of sterner stuff and 11 people braved the elements for what was to be a superb walk.  After meeting at Oakwood station, we set out along a footpath taking us into Trent Country Park.  Our path took us into woodland with mist hanging in the trees and around the outskirts of former Middlesex University campus buildings now standing empty awaiting the approval of a planning application to refurbish the 18th century manor house, and rather surprisingly to build over two hundred new affordable homes.  Walking along the main avenue we reached Cockfosters Road where we met one of a number of several friendly dogs we met on the walk, this one a beautiful bear like Japanese Akita.  After taking it in turn to have cuddles, we crossed the road and into Monken Hadley Common which is more wood than common with its dense trees and shrubs.  On emerging from the wood we climbed a steep hill bringing us into the pretty old village of Monken Hadley, and from there to the high street of High Barnet where we stopped for lunch. Just when we thought the footpaths on our walk couldn’t get any muddier, a steep section of the path leading us from High Barnet to Barnet Underhill, sent us slipping and sliding as if we were on a ski slope.  But thank goodness, no harm was done! From Barnet Underhill, we walked into a park and along a path following the winding stream of Dollis Brook, ending our walk at Woodside Park.  From here we each made our way home on the northern line.  Although it would have been nice to have seen the sun, it hadn’t spoiled what had been a most enjoyable day.
Mary King