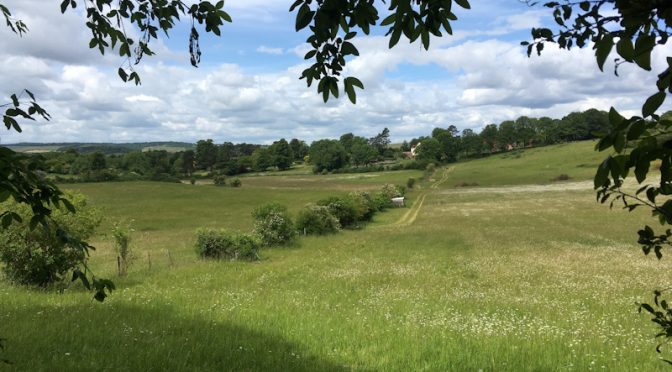 Back in the Chilterns for an undulating 12 mile walk (although Jackie admitted it was more likely to be 13 miles) through woodlands and fields. Only 6 Polyramblers despite it being a sunny day but the lack of pub might have deterred people.  We soon left Goring, going up to Wroxhills Wood, accompanied by red kites mewing above us.  We skirted Woodcote and went through Common Wood. At one point, we lost Pam and Andrew but we found them again.  We had decided on a place to have lunch but we got lost in a wood and, as it was getting late, we stopped for our picnic before reaching the lunch stop. Suitably refreshed, we soon found the path again.  Pam was reminiscing about last year’s walk when Geoffrey produced a bottle of prosecco to celebrate his first 40 years in the Club.  She even showed us the bench where the celebration took place.  We arrived in Bottom Wood and after climbing a hill, we were rewarded with lovely views of the Thames and Hardwick House. We had a rest in the sunshine before continuing steeply downhill to Whitchurch on Thames where we crossed the toll bridge (free to pedestrians) before reaching Pangbourne where we had time for a drink at The Swan before catching our train home.