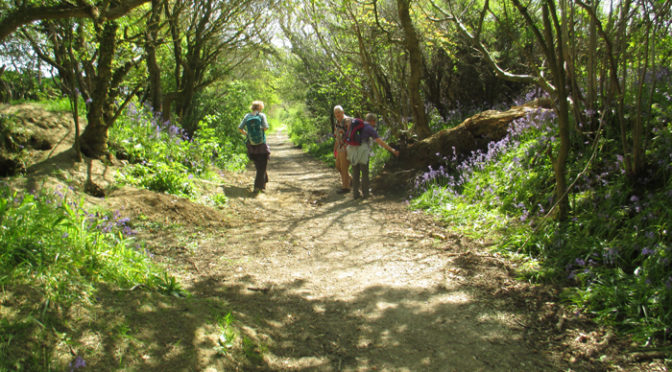 Having just arrived from home my choir rehearsal the Tuesday before, I went to open my tablet to check something online, whereupon an email arrived from Gillian seeking a leader for this walk, as Jackie couldn’t do it due her recent ankle injury. I turned round to look at my bookshelf, and lo there was the “Time Out” book with the walk in it.  And such a lovely walk in a lovely area – it has to go ahead.

I replied to Gillian instantly to say I would lead it and did.  On the day I left on the 6:38 train to St Pancras, and arrived at Victoria at 8am.  Although the ramble train didn’t go till 9:07 this allowed me ample time for a good hearty breakfast at Weatherspoons on the station balcony.  From there I saw Harriet arrive who came up to join me,  then Hilary.  It was sunny and beginning to be very warm. We decided to board the train 10 minutes early which was just as well because all the seats were taken on departure.  Ian Gordon also turned up and joined the train,  so he could have a day out in Brighton rather than join our walk.  At Clapham Junction more people piled in, including Nigel.  Hilary, Harriet and I occupied a 4 seater area, and the young person in the 4th seat gracefully gave it up for Nigel. At East Croydon, boarding was becoming impossible but some did try,  however a 2nd Brighton train was due there in 3 minutes!

On arrival at Brighton a multitude alighted the train with us,  and we said goodbye to Ian and went round the corner for the Ashford DMU which soon came in and took us onto Berwick.  The walk started in a South direction and we left another party outside the station who were deliberating their route. We reached Wilmington village having passed bluebell paths and views of “the long man”.  We decided to have a quick  liquid refreshment stop(photographed) there at the Giants Rest PH.  Then we carried on up the downs and woods to Folkington church and over another down until we reached Jevington for our main lunch at The Eight Bells. After lunch we climbed the next down out of Jevington, and from near the top, we could see distant sea views and to the East and below was Eastbourne spread around.  From here it was a straight track (Wealdway with South Downs Way) that took us beside a golf course and then down to the main road at Eastbourne Youth Hostel,  rented on previous weekends by polyramblers. At this point we had done just over 9 miles.  As Nigel doesn’t do long walks I suggested he got a bus from here into town.  We saw him onto the bus.  But as there was nearly an hour for the 1759 train I decided to carry on walking to the town centre with Hilary and Harriet.  The book described a rather convoluted walk for 2 more miles from hereon but we made the train with 10 mins to spare.  And it was another busy train but we all enjoyed this day out on the downs.  I eventually got home at 21:30.  GEOFFREY