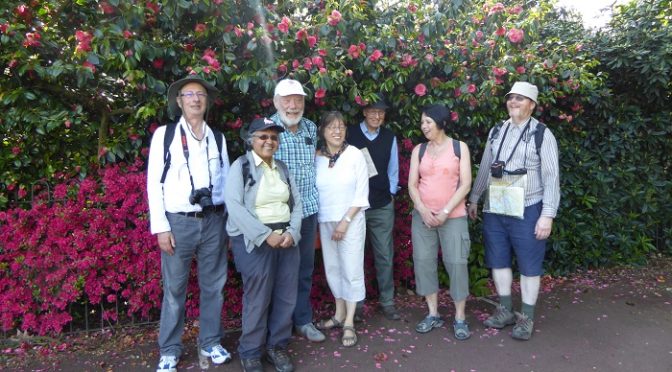 On a very hot Mayday bank holiday weekend, 29 Polys gathered at Tower Hill for Dan’s 70th birthday walk to Blackheath. Pushing our way through the crowds of tourists, we walked round the Tower of London, and through St Katherine’s Dock and on to Wapping, Shadwell and Limehouse. By the time we reached Millwall Dock on the Isle of Dogs, it was a very hot and thirsty party of walkers that enjoyed a birthday drink courtesy of our leader – thanks, Dan!. The rest of the walk took us through Mudchute Park and City Farm where there were donkeys, pigs, chickens, pigmy goats, sheep and lambs to be seen. We then arrived at Island Gardens for a  magnificent view of Greenwich and the Cutty Sark, and the even stranger sight of an enormous cruise ship moored nearby. Then it was through the foot tunnel for a late lunch in Greenwich, which several people had in Wetherspoons with others sampling the fare on offer in the local markets. Most of the group left at this point but a stalwart party of 8 continued to Blackheath, last seen heading for the Royal Observatory.