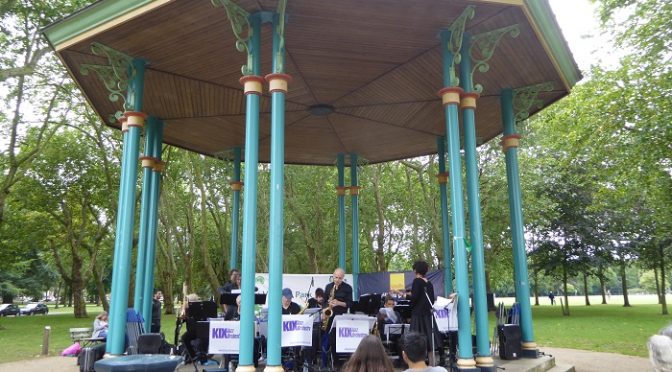 Nine Polyamblers met at Stratford, despite the drop in temperature and pessimistic weather forecast, for the stroll across the Olympic Park, past the stadium where Danny was watching athletics the week before, and along the thoughtfully renamed Greenway (formerly the Northern Outfall Sewer Cycleway!) to Victoria Park, met by a flock of mini-cyclists wearing yellow high-vis jackets and then through the Old English Garden, past the East Lake and the massive Burdett-Coutts Drinking Fountain to the grassy expanse of the East Park. Not far from the bandstand we were pleasantly surprised to find some bright green picnic tables and so we tucked into our packed lunches, refreshed by some chilled rosé wine brought by Danny and fortified by a delicious cake made by Lucy. When we could hear the musicians tuning up we made our way over to the bandstand and some of us were lucky enough to find a place on one of the park benches. Others were less fortunate and took their seat on Danny’s groundsheet, joined by Susan. The KIX Jazz Orchestra consists of five saxophones, four trombones, three trumpets, two guitars, keyboard and drums. They made a very stimulating, stirring sound, embellished from time to time by Kate Daniels’ singing. Feet were tapping and the park bench was bouncing up and down in time to the music! Dolly said she would get up and dance to the music, especially when her husband, Mick, was playing a saxophone solo, but none of the rest of us took up her challenge! Sitting on the ground was understandably uncomfortable and after an hour or so some of our party decided to take the bus to Mile End station. By then there were lots of people sitting around on the ground enjoying the music and the sun came out. The rest of us stayed on until the last note was tooted! Then we also made our way to Mile End with the tunes still going round in our heads. We talked about organising such a day out next year but bringing our own cushions or little portable chairs as other people had done! A very enjoyable day!  Pam