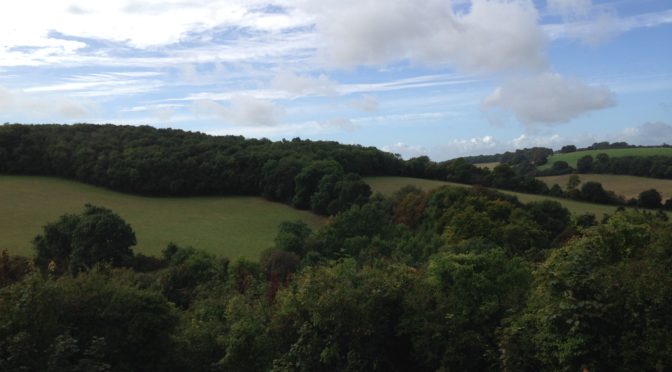 It was a lovely, sunny autumn day for this undulating walk following parts of different paths: the Woldingham Countryside Walk, the North Downs Way, the Vanguard Way and the Greenwich Meridian Trail.  There were 12 Polyramblers on the train but two forgot to get off at Woldingham station.  We started the walk going gently up through woodland before reaching the North Downs Way where we had a nice view of the countryside bisected by the M25 and the railway.  We had a steep descent and then a steep ascent before  continuing through farmland and hidden valleys passing a field with cows adorned with very long horns.  We received a phone call from the two missing Polyramblers telling us they were having lunch at the Club House of Woldingham Golf Club.   We then lost another Polyrambler who could not face a second steep hill.  We had a late lunch stop at The Bull in Chelsham.  When Susan did the recce, the pub was called the Coach House and it served Sunday roast.  Unfortunately, it seems that the pub had changed hand and there was no food to be had.  A few of us had brought a picnic and others had to make do with a packet of crisps for lunch.

The afternoon walk was shorter.  We followed a path above the golf course.  We saw lamas in a field and passed the Club House where our two colleagues probably had a very nice lunch.  We went through Woldingham Garden Village before taking a nice country road to the station.

Thank you Susan for a lovely autumn walk.