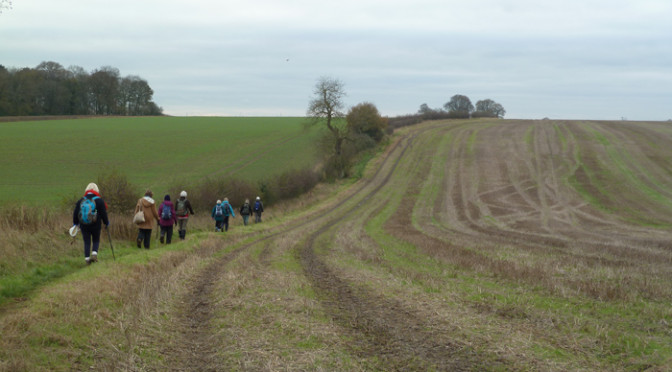 Having made my own way to this station I sat in the waiting room of platform 2. The 10:49 from London arrived. I looked out for a group of polyramblers amongst large swathes of people alighting with their bulky luggage. After a minute or so it became clear there were none!  Strange, I thought.  I took out my club programme from my rucksack only to find they would be due on the 10:54!!!  And indeed they were!  All 9 of us proceeded out of the station past the shuttle buses and  huddles of people with more bulky luggage, down the station approach to the Wheathampstead B road, and we turned left up steps and climbed more steps onto a field path at airport perimeter. From here we saw the odd flight departure.  We could see the tailgate of other aircraft taxiing.  Our path took us up to the ruins of Someries Castle – only the gatehouse and chapel is left as one of the earliest red brick buildings of a 16th century  manor.  From here were proceeded  SEward along a lane which took us to the Bright Star pub at Peter’s Green.  No food was available due to an incomplete kitchen refurbishment, but I had forewarned the party already and Kate & Nick the new owners, kindly let us eat our lacke lunches inside.After refreshment we took a path down into the Lea valley where we picked up the remains of the Hatfield and Dunstable railway bed, now tarmaced over for the benefit of us and cyclists. We followed this track past a sewage treatment works – on the way home you may have seen this from the train all lit up. The track continued uphill a little and we saw a field of cattle, behind which was the Luton Hoo estate,  and behind that again the sun, soon to set over the hill. We were soon back at Luton AP station, where I quickly escorted the party onto the 15:47 London train, being announced at very short notice. I got home at 16:30. We all had a good day out. 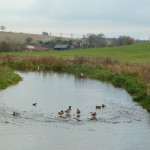 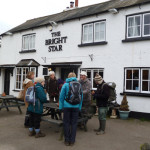 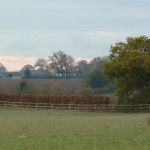