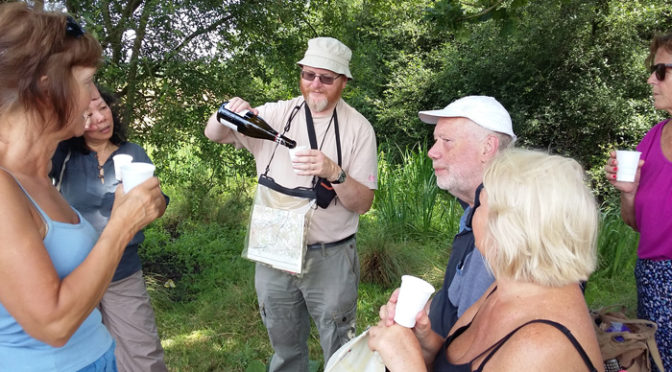 For the second walk on a hot and sunny weekend, thirteen ramblers gathered at Watford Tube Station for a ‘strollers’ walk towards Rickmansworth. The length of five miles was immediately added to by a few hundred yards taken in the wrong direction by the leader before he realised his mistake! After the false start, we entered a busy Cassiobury Park and went towards the Grand Union Canal which runs through it. We joined the towpath and headed south. The promised kingfishers did not appear but we did see a moorhen and a dead carp!After a couple of miles, we left the canal and walked across Croxley Common Moor which is a Site of Special Scientific Interest because of the variety of its plant life. On the far side we stopped under the shade of a tree for a celebration of Geoffrey’s forty years with the club. He said a few words about his memories and then we toasted him with some bubbly.We then joined the Ebury Way, a traffic-free path along the route of an old railway line, for a mile or so before reaching the canal again. The towpath from here to Rickmansworth was lined with houseboats of all sizes and colours. We stopped a couple of times to feed the wildlife including a family of swans with five hungry cygnets. The White Bear pub was a welcome site at the next bridge and we quenched our thirst & appetites there. Finally a short stroll through the town via the parish church took us to the station for our journey home.
Danny