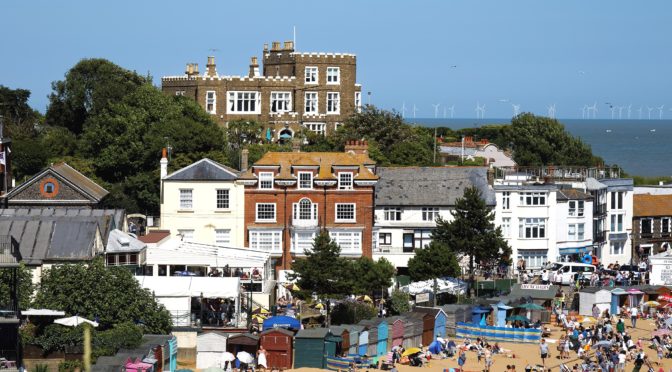 The forecast was for a cloudy day but, in the end, we had sunshine for most of the day. After a pleasant journey on HS1, 15 Polyramblers alighted in Margate. We walked along or on top of low chalk cliffs passing Fulsam Rock, Walpole Rocks and Long Nose Spit and nice beaches with beautiful sand in Palm Bay, Botany Bay, Kingsgate Bay and its Castle and Joss Bay. We continued to Broadstairs – Charles Dickens’ favourite holiday spot – which was quite crowded.  We saw his house and ate in his pub. Some of us also had an ice cream at Morelli’s ice cream parlour. While 6 Polyramblers decided to explore Broadstairs’ delights, 9 of us continued to Ramsgate. Danny was quite excited to arrive in Ramsgate to see the Royal Victoria Pavilion, the largest Wetherspoons pub in the world! We did not stop there; instead, we continued to the station to catch the HS1 back to London after a lovely 10 mile walk.

photo of Broadstairs and Bleak House by acabasi