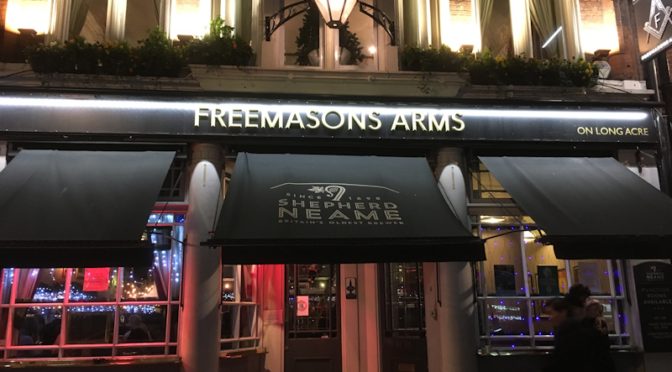 It snowed the day before the Christmas lunch but, thankfully, this bad weather was in Scotland and the north of England and it did not reach the South East.  Around 20 Polyramblers met at Hyde Park Corner tube station for a pre-prandial walk.  We passed under Wellington Arch to go into Green Park, went to the Bomber Command monument and walked to Buckingham Palace.  Danny had ordered a band for us or perhaps we were there in time for the changing of the guard.  No time to find out as we went into St James Park.  We left the park and the crowds and went into King Charles Street.  Clive had his picture taken by Lord Clive’s statue at the entrance to the street.  We crossed Whitehall and walked to Victoria Embankment Gardens where we saw the Iraq and Afghanistan Memorial and Charles Gordon Statue.  We continued to Whitehall Gardens and Embankment Place to enter Victoria Embankment Gardens.  We stopped by Robert Burns’ statue where Sandy said a poem and admired the small but lovely memorial to the Imperial Camel Corps.  We left the garden by the back entrance to the Savoy Hotel but did not stop there for lunch.  We went up Savoy Hill where we stopped briefly at the Queen’s Chapel of the Savoy.  We crossed the Strand, went up Wellington Street, Drury Lane before reaching the Freemasons’ Arms for our Christmas lunch.  There was a full complement of 44 guests much to the chagrin of someone who shall remain nameless and who had been hoping for snow in order to get extra portions.  As usual, the food did not disappoint.  We have learnt from experience that, when we stray from the Freemasons Arms, we always regret it.  Hilary managed to make a speech without anybody fainting.  We exchanged Christmas cards and went home after a nice day with friends.