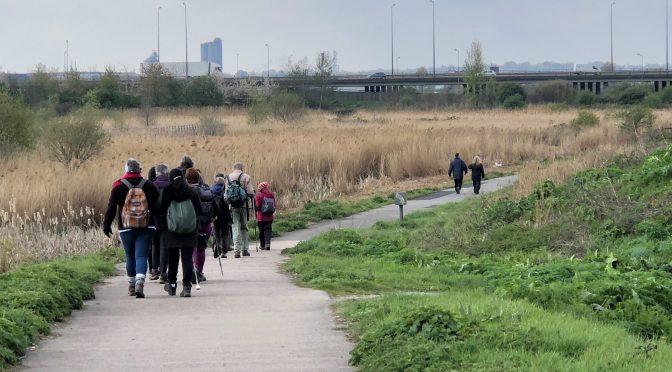 Despite so-called “planned” engineering works causing travel disruption both on the trains and the underground, 30 of us met up at Liverpool Street station, 10 Polyramblers and 14 London Blind Ramblers. It was just as well the LBRs had brought some sighted friends to help guide them! We paired up and set off. The path was mostly smooth. Robin and Maria set a good pace. Birds tweeted in the brambles. Was that a Cetti’s Warbler we heard? We passed a couple with a child examining a greenish eggshell beside the path. They thought it was a duck egg which a crow had stolen from a mallard nest, broken open and eaten the contents. The A13 hummed in the background until we climbed the slope up to the riverside path, passing Tilda’s rice mills (one of Europe’s largest), which receives grain from Italy, Canada, India, Thailand and Uruguay. As we walked along the Thames pathway, we occasionally stopped to listen to recorded messages explaining about the history of the area – for example how the farmers sent the hay from the marshes to market in London by boat and the boats returned full of London waste which was dumped on the marshes. Nowadays Veolia manage the landfill site (2,000 tonnes of waste a day!), which, it is said, is taking longer than planned to top off because Londoners are recycling more waste than was originally expected. One landmark, known locally as “the Stone Barges”, are really concrete tank “lighters”, used to carry water or fuel. They may have been used as support vessels for the D-Day landings in 1944, or intended to form part of the Mulberry harbours. It was low tide but there were no seals sunbathing on the foreshore on the other side of the river as there are sometimes. However the sculpture of a figure in a diving suit, made out of shopping trolleys was fully exposed. Sparrows chirped in the bushes on either side of the path and skylarks sang overhead. It was sunny but there was a chill in the occasional breeze. When we got to the RSPB reserve, some of us ate our picnics on the balcony overlooking the river, or in the visitor centre garden with more vociferous sparrows in the bushes, starlings and magpies squabbling on the seed feeders and collared doves profiting from the seed which the other birds knocked down onto the grass. Other walkers queued for refreshments in the cafe, overlooking the reserve, or headed to the RSPB shop to buy bird seed and fat balls, or other bird-related goodies. There were about 10 walkers who chose to terminate the walk after the lunch break. They set off past the gunpowder magazine, built in 1763, and the Victorian holiday resort of Purfleet to the station. The rest of the group returned to Rainham along the Thames path which runs along the top of the most recent sea wall dating from the 1980s, although at low tide the remains of the wooden mediaeval sea defence, the Victorian sea wall and the wall built after the 1953 floods are in evidence. We were able to enjoy more sunshine and fresh air, arriving at the station with 10 minutes to spare.

Below are some RSPB links to birdsong:

Well done Pam for organising this. Sorry there weren’t more of us with you. Mike