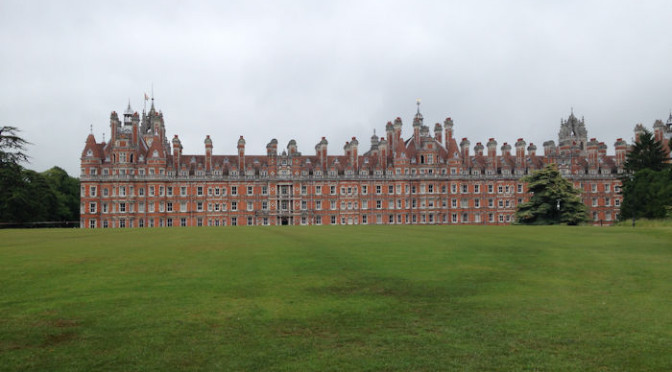 My first club ramble I ever attended was from Egham station almost exactly 37 years ago! It was led by the late Peter Gould, and I remember Rosie and Rosemary attending!   Since then the station has been completely rebuilt with a housing estate nearby. This time the ramble date is Sunday 14 June 2015 and we are celebrating 800 years of Magna Carta, and my route took us into Royal Holloway College where we spent an hour at their Great Charter Festival open day. We were free to walk around the quadrangles and grounds, the main attractions of interest being a Victorian Art Exhibition, and another exhibition counting statistics using grains of rice! It was an easy way to show how the population of England and Wales in the late 1700s was smaller than today’s population of Greater London alone! We then continued to Englefield Green either picnicking on the Green or lunching at the Barley Mow PH. In the afternoon we proceeded along Cooper’s Hill Lane where there was quite a police presence – some anti-establishment protesters had gathered near the car park, but it was a peaceful scene – no anarchy.  We continued past the RAF Memorial until we reached a footpath on the left heading down hill.  More police presence at the top of this footpath, but when I explained to them our wish to see both Magna Carta and Kennedy memorials and proceed to the Thames path, they sounded happy and said all the paths were open.  Eventually we reached the Magna Carta memorial, whereupon I drew to my party’s attention a key tablet within the memorial which had been recently engraved “This tablet..…reaffirmation… of Magna Carta……. and was unveiled by the Princess Royal on 15 June 2015”.  The date of tomorrow, denoting the event in an enclosed area, adjacent on the meads, was due on the 15 June with key dignitaries including PM, Queen and Archbishop of Canterbury.

The impact of Magna Carta today is the democratic parliament that we have in the UK and this is also recognised within the USA government since they have been independent over 200 years ago. The plot of land around the Magna Carta memorial is given over to the American Bar Association.

We continued to view the John F Kennedy memorial, then as we set across the meads to the Thames path we could hear hooting from barges. The Thames path was quite busy with visitors. The river itself was busy with many private little boats. After a mile or so we caught a glimpse of the Royal Barge Gloriana which carried the Royal Family on the Diamond Jubilee London Thames flotilla in 2012. We then crossed the A308, and continued across the meads back to Egham. On reaching the station, the party were just in time to board the 16:15 back to Waterloo. So I had to say goodbye in double quick time as I was travelling by car! 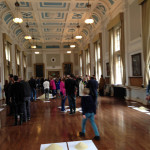 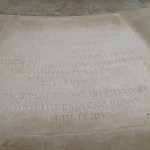 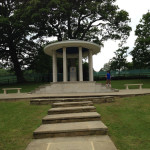 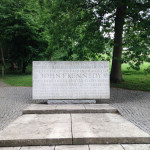 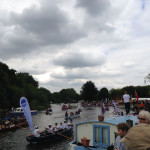