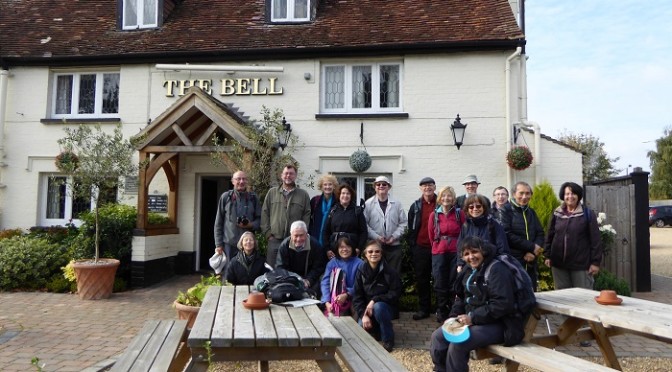 After 45mins or so, once we’d all coffee’d, 18 of us (except Ian – who decided to do his own direct walk to the pub and back!) set out on the ramble going westward, using the fieldpath to Priestley Farm. Unlike 10 years ago, no sights of growing pumpkins, but a different plant undergoing some harvesting. At the farm we turned southeastwards across another field then along the side of a wood and over the River Flit, reaching Westoning village where we rested at The Bell PH for refreshment.

I have to express some disappointment that The Bell was unable to provide us with their Bar Snack Menu (for sandwiches) which they advertise on their website as being daily available from May 2015. However some of us were able to content ourselves with bowls of soup, which turned out to be quite filling. After lunch we continued northeasterly from Westoning along a lane which then became a simple track leading up to Higham Bury. The afternoon low autumn sunshine lit up the landscape beautifully. This track continued through a field edge then became a very overgrown metalled track which opened out into an area with caravans and debris then a road. On the other side of the road we continue up a driveway which bent left into some smallholdings. Our path continued through a short muddy wood and another field till we crossed the Flit again and followed it a short way via a riding school, bringing us back into Flitwick.

We arrived back at the house, to find Danny, Christine B, Hilary, Clive and Solvig had already arrived. Then it was all teapots out to prepare tea for 26! I had cakes and other food laid out. I had to give Harriet some kitchen space so she could put the finishing touches of whipped cream to this absolutely gorgeous sponge cake she produced with raspberries. We found some candles to decorate it, also  a large chocolate cake, and thirdly an array of fairy cakes. I procured a box of matches and with some assistance we lit all the candles, of which I lose count of how many!! I enjoyed the rendition of the happy birthday song, and used what breath I had to blow out all the candles!

I started to cut the cakes – and the Harriet cake was under much demand! I managed to save a piece for myself and I have to say it was the best sponge I’ve ever tasted! More refreshment in the way of Cava and a buffet followed.

Although we were a little congested in the house, we managed OK overall. It was lovely to see such a good attendance. I would also like to say thank you for all those who attended, and particularly to all those who contributed in baking/cake making, and especially a big thanks to the providers of prezzies in the form of a railway book, choccy boxes, bottles of wine/cheese, Costa coffee gift card. I will attempt to thank individuals separately but just in case I leave anyone out thank you everyone for your gifts. I do appreciate this very much as you all have made this an enjoyable day that I will always remember into the future.

Thank you very much again everyone.
Geoffrey Waters 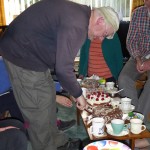 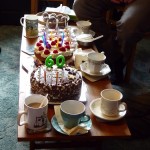