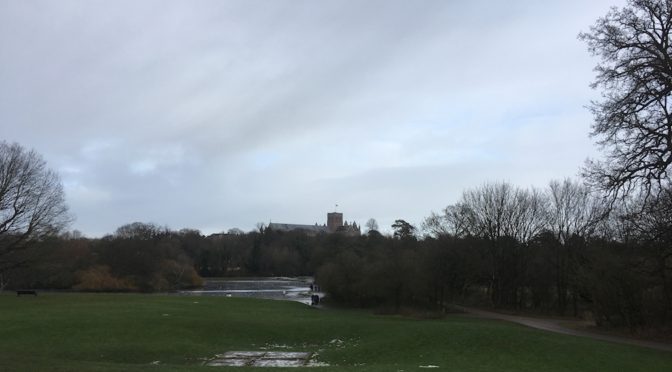 The day started with sunshine and 19 Polyramblers. A few of us reminisced about the walk we did in St Albans in December 2010, led by Danny, when snow started falling when we went into the pub for lunch and, when we came out everything was white and magical.  A photo taken by Stuart that day ended up as one of the Club’s Christmas cards.  But, this year, the snow that had fallen the previous weekend had mostly gone and only the cold weather remained.  Geoffrey met us at St Albans City station and led us to the car park and his car where he changed one of his shoes as he was wearing odd shoes.

We made our way through St Albans market to the cathedral where we stopped for coffee. The sun disappeared and it started drizzling as we made our way to the Verulamium Lake and to the London Gate where we saw the remains of the ancient Roman walls which we followed up the hill.   Walking back down , 9 Polyramblers were distracted by a bird of prey perched on a branch and did not notice the group had turned left in Verulamium Park. We did not see them again but knew they were safe with Danny. The rest of the group continued walking through the park and went off to lunch in different directions.  We then made our way to the cathedral to attend one of the lovely hourly carol services.

PS – Pam had a reply from her experts at Rainham Marshes. They are certain the bird was a juvenile buzzard,