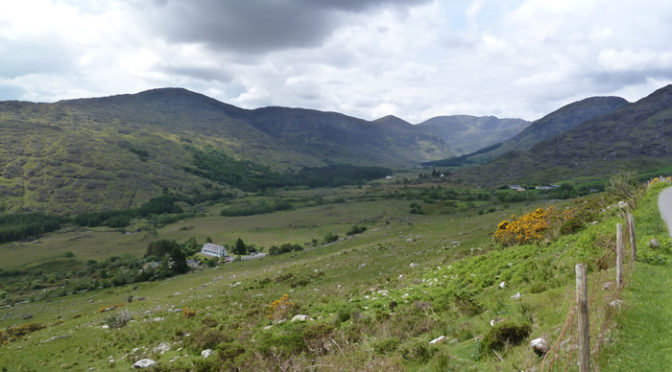 An impressive 32 made their way to Killarney where we stayed in several B&B’s. It’s a small town and, as the gateway to the ring of Kerry and the lakes, is  given over to  tourism. The main streets are very lively with dozens of bars and restaurants and throngs of visitors from all over the world. There’s music everywhere,  in bars and hotels and also from street performers. We particularly enjoyed a Scottish busker, complete with golden wig, who had a scurrilous song about Donald Trump to the tune of the Boxer.

As usual there were two levels of walks arranged over the three days. Sandra suggested that those doing the longer walks be called Hikers, and those doing the shorter ones, Strollers.

Sandy writes. On the Friday,16 Strollers caught the shuttle bus to Kate Kearney’s Cottage, along with a few more tourists and Fergus and Hamish the labradors.   We started the walk through the Gap of Dunloe in fine weather and made a gradual ascent to the summit of the pass.  A fellow Rambler has mentioned the rugged beauty of the scenery and my descriptive powers can’t match his.  However it matched the scenery to be seen in such places as Glencoe and the Lairig Ghru,  if you have visited the Highlands of Scotland.
As we got further into the pass the road became steeper and we found that the walk was going to take longer than expected.  This meant that we would be late for our boats, but our intrepid leader had the situation under control and phoned the boatman to secure our places. A special feature of the Gap was the constant stream of horse and traps carrying tourists who would rather ride than walk.  The vehicles are known as jaunting cars and their drivers as jarveys.  The road was so steep in places that the drivers and passengers had to dismount to make it easier for the horses.  There were a few cars too and which made the road congested at times.   I am informed by a reliable source that the high point of the pass was 239 metres.
The descent at the other end of the pass was even steeper than the ascent and we were glad we hadn’t done the walk in the other direction.  We came out into the beautiful Black Valley, so called because so many people died there during the Great Famine.  Here and there in the valley were neat little bungalows which looked fairly new and a little church.  It must have looked a lot different at the time of the famine in the 1840s.
Eventually we reached Lord Brandon’s Cottage.  This was at the start of the Lakes of Killarney, three lakes which are connected by rivers.  We had to travel in two boats and in mine we were joined by Hamish and Fergus.  The lakes are connected by rivers and the water level was quite low.  At one point a few people had to get out of the boat to create enough draught.  One of our number slipped as he was getting out and grazed his shin.  I understand that his wound is healing nicely.  After a voyage of between one and two hours  we reached Ross Castle.  Most of the group walked back to Killarney but the injured Stroller took the bus with Hamish and Fergus.

Gillian writes. The Hikers were up early on Friday morning ready to climb the first summit of the weekend – Torc Mountain – admittedly a fairly modest peak at 535m.  Sixteen of us boarded the shuttle bus and were slightly disconcerted to find that the bus driver didn’t issue tickets, but assured us that he would remember us for the return journey.  This would never happen in the UK!  En route we passed Ross Castle where crowds of anglers were convening for a fly fishing competition, – won by England, we heard later.  We left the bus in the extensive grounds of Muckross House, a Tudor style mansion built in the 1840s for Colonel Henry Arthur Herbert, an Anglo-Irish politician.  We strolled along rhododendron- lined paths to Torc Waterfall, climbing steadily and eventually left the surfaced path for a steeper one consisting of stepped railway sleepers over boggy land interspersed with sections of rocky boulders and gravel.  The weather was perfect for walking and the views of the lakes and mountains were stupendous.  After climbing steadily for an hour or so we reached the summit and, unusually for mountain summits, we were able to sit and admire the view  without being blown off our feet or becoming hypothermic.  The descent was the same way but seemed harder going and a couple of us took tumbles on the way down.  After lunch at the bottom the next part of the walk was a 6 mile circuit of Muckross lake.  What could be easier – we thought – but in fact the route was hard surfaced all the way and undulating. Mike offered a short cut but the hikers don’t like to be seen to give up and we all decided to  carry on.  Having been promised tea at Dinish Cottage, half way round, we were disappointed to find it closed indefinitely.  Weary and foot sore after 12 miles, we were pleased to eventually see the Muckross Estate hove into view.  It was full of tourists and jaunty cars and we headed straight for the shuttle bus which just had enough seats for us.  Luckily the driver did recognise us!

The Polys have climbed Ben Nevis, Snowden and Scafell and consideration was given to climbing Ireland’s highest peak, Carraountoohil. A small amount of research made it clear that this was way out of our league, involving scrambling, narrow exposed ridges and sections so steep that turning back isn’t an option. However, Carrountoohil is part of a classic horseshoe walk, and at one end is Caher, at 1001 metres, only 40 metres lower and a much safer proposition. I had planned a route which had the benefit of a café at the end, but on speaking to Johnny, co-proprietor of the excellent Bricin restaurant, and an experienced walker, decided to opt for the hydro road route. There were a lot of walkers out on the Sunday, there being a charity walk in aid of the Mercy Hospital in Cork. They were all doing the full horseshoe.

Hilary writes.
We had advance warning that there was no defined path and to be aware of a number of possible hazards along the way. We arrived in time for our minibus containing 13 Hikers to park in one of the few car park spaces left with a steep and well marked out path ahead of us to make a steady determined ascent, only to be  overtaken by a number of climbers half our age including a couple with a six years old child. We were rewarded with a cloudless sky and a beautiful vista of the other ranges and surrounding lakes. The ascent towards the peak did indeed prove to be hazardous and very steep with a number of loose stones and rocks interspersed with grass. We reached the point where a cairn marked the first summit of Caher and  all that remained was a steep ridge to the top of the mountain. Some of the group managed the scramble up to the cairn taking in the panoramic views below, before returning to the main group. A thoroughly enjoyable day and a great test of our fitness!

We were generally left to our own devices with regards to evening meals and Killarney offers eating to suit all palates and purses. On the Sunday, Danny had arranged a group meal at the Caragh restaurant and this was a most enjoyable, our group having the sole use of a function room with its own bar.

As is clear from the photos we were particularly fortunate with the weather. On Monday, half the group returned to a windy and wet London and the other half spent a night in Cork, making a trip the next day to its attractive port of Cobh.

As always, these things don’t just organise themselves so our thanks to Danny for arranging such an excellent trip and providing us  with such comprehensive trip notes.