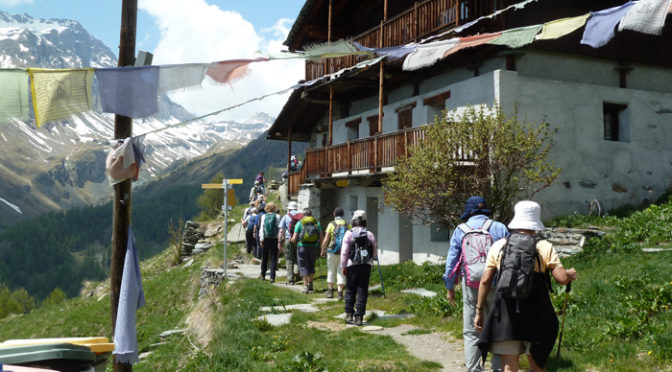 Thursday 25th May.  Mike writes.  Our early afternoon flight landed in Turin at 4.30 pm for a 2 hour coach transfer to Cogne. This took us on motorway up  the Aosta valley, a principal  route between Italy and Northern Europe via the Mont Blanc tunnel. Turning off just beyond Aosta, the last stretch was on a sinuous local road  in the Cogne valley,  high above the rushing Grand Eyvia river with some extremely scary unprotected drops. Those brave enough to have their eyes open caught a glimpse of the famous Roman bridge at Pondel, way below.

We were soon in Cogne, a small mountain town and checked in at our accommodation, Residence Chateau Royal. This fine building dates from the 11th century and was built as a fortified tower. It has had a number of uses including a royal residence and a bishop’s palace and is currently arranged as a number of comfortable and well equipped apartments of varying sizes.  There was just time for an orientation walk before setting off for our evening meal at Al Tarabas restaurant. Here we were served large amounts of substantial fare, appropriate for those about to engage in strenuous physical activity. We were attended by extremely friendly and patient staff. A good number of our group ate at Al Tarabas on all  four nights. Afterwards, myself Dan and Sandy had a nightcap at Bar Grivola. We had a very agreeable blokeish chat with a small group of English and Italian chaps who were in the area reccying for a Canali commercial. Dan offered his modelling  services but at the time of writing I don’t think he’s heard from them.

Friday 26th May
We were met by Stefano our guide for the next three days. Originally from Rome and  having worked in an office for some years he had tired  of city life  and moved to Cogne some 5 years ago.  He explained that the area immediately around Cogne is prone to avalanches and for this reason there is no Alpine skiing. There is snow walking, for which Stefano organises groups, and some cross country skiing . In consequence it is relatively undeveloped and  retains its traditional village feel. In the summer months, it is very popular with families.

Pam writes. The weather was much more favourable than expected.  I set off togged up as for winter,  in case mountain storms rolled in while we were high up,  but  Stefano told us the weather forecast was good. All I could do was leave my anorak behind. We strolled up through the village, posing for a group photo against the snowy mountainous background of the Gran Paradiso National Park. What lay ahead? We strolled up alongside the river, observing the remains of the iron mines on the opposite hillside,  to the impressive Lillaz waterfalls and more photo opportunities. Then we got down to business! My knees were like jelly, which I attributed to the altitude rather than fear.  I was soon huffing and puffing, trying to keep up with the group, but enjoying the views – a good excuse to pause, look back down the valley and take some photos.  As warned, we couldn’t complete the circular route as originally planned because the snow was still too deep at the top and, even lower down, the snow was still treacherously icy despite the sunshine. As the snow melted it created rivulets, turning into gushing streams, which we had to skip over or through on our way up through the woods. It took us longer than Stefano had estimated, partly due to those of us at the back but also because he paused a lot to tell us about the many flowers we saw along the way – orchids, ranunculus, gentian, anemone of various colours, and trees – larch, spruce and Scots pine amongst others.  Geoffrey asked us to leave him at the mountain chalet where we stopped for our picnic lunch and we collected him on the way back, by which time he had begun to work out how he would get back on his own, fearing we had forgotten him! Stuart spotted a marmot on the way back down. It was bigger than I had expected but in the long grass on the far side of a meadow and  didn’t linger long enough for a photo opportunity. We had a cool refreshing drink sitting outside a bar in Lillaz, home to a colony of stray cats, before making our way down beside the rushing river. We arrived  back at the château with just enough time to jump into different clothes and walk up to Al Tarabas to join the others for dinner.

Saturday 27th May  Pam writes. On the Saturday we were taken on a long coach ride to Saint Jacques, during which we were able to admire the mountain views and different villages along the way. After a steep climb we rewarded ourselves with a very tasty lunch at the Rifugio Ferraro at 2,066 metres which gave us the energy to continue on upwards to the Blue Lake. The water was too tempting for Harriet and she took a dip in the icy water!  We had to keep up a good pace on the way down because we were later than scheduled and the coach driver was waiting for us down at Saint Jacques. This time we didn’t even have time to go back to the château to change, so went straight to Al Tarabas for dinner.

Mike adds. For me, the lunch at the Rifugio Ferraro was one of the highlights of the trip.  These establishments are not accessible by road and provide basic accommodation as well as food for people doing long distance routes on foot and skis. The owner of this particular one had spent time in the Himalayas and there were prayer flags outside and evidence of links to a Nepalese childrens’ charity. We sat outside, enjoying the sun with a magnificent backdrop of snow clad peaks.

Sunday 28th May  Pam writes. We caught the local shuttle bus a short way up to Valnontey, to the start of the path which led eventually up to the Rifugio Vittorio Sella where we had lunch. On the way up (900 metres in altitude) we saw chamois and ibex munching the fresh green grass and hardly pausing to look up and see who we were or what we were doing.  My huffing and puffing didn’t seen to put them off eating! We also saw silky black squirrels scampering about in the woods and more flowers. Nearer the Rifugio there was still quite a lot of snow on the path and on the plateau. In fact I slipped over on my back on the way back down but at least the snow was soft! Back at Valnoney, Stefano’s wife and in-laws were waiting for us.  We had a beer with them before a brisk walk back to the château via the delightful Sant’Orso village meadow, a sea of buttercups and dandelions, just leaving time to wash and brush up before our farewell dinner at Al Tarabas.

All the people we met, the ladies at the restaurant, in the mini-market where Stefano’s wife worked and the young ladies who oversaw the delicious breakfast and egg-boiling machine each day at the château were so friendly and helpful.

Monday 29th May. We all caught the coach down to Aosta to meet an excellent guide, Claudia, for a  very interesting tour of the Roman ruins. It was then time for those of us returning home to take the coach to the airport. Thank you to Susan for organising such an enjoyable trip and to Stefano for his excellent guiding.

Gillian writes;  At the end of our guided tour of Aosta,  Susan escorted the dozen or so people who were flying back to London to their coach and left the rest of us to find some lunch with strict instructions to be at the station in time to catch our train to Verres an hour later.  Inevitably  the train pulled out of the station with three Poly Ramblers left standing on the platform.  From Verres we had a slog up a steep cobbled path  in the heat to reach the 14th century fortified castle which overlooks the town.  When we finally made it in varying states of exhaustion we were met by Dolores, our guide, who we should have met in Aosta, but for some confusion over dates.  The castle was very austere with no interior decoration but Dolores did a good job of explaining its history. The three who had missed the train finally arrived half way through the tour.  Later back in the town we enjoyed beers and nibbles before heading back to Cogne  for our final evening meal at Bar Fromage who provided aperitifs.
Next morning found us loading our luggage onto the coach for the two hour journey to Turin for our city extension.  Before long we arrived at our hotel on the northern outskirts of the city to find that the air conditioning had broken down.  Thankfully it was fixed by the end of the day.  There were eighteen in our group and squeezing onto an already packed bus into the city centre was an interesting experience, as was making sure that we all got off at the right stop. We found our way to the Palazzo Madama where we were meeting Valeria later.  Stuart was keen to visit the old Fiat factory to the south of the city which is now a shopping centre. After a long walk along the river we found it and fortuitously bumped into Almas who somehow had managed to secure a key to the car test track on the
roof where scenes from the film the Italian Job were filmed fifty years ago.This made Stuart’s day.  Meanwhile the rest of the group enjoyed the historic city squares and riverside park.  The next morning most of us headed off together to visit the Cathedral where a replica of the Turin Shroud was on display.  We then made for the Porta Palazzo open air market where we browsed the fruit and veg stalls, admiring the sheer variety on offer and the low prices.  From there people started to peel off, some to take the lift up the Mole Antonelliana for great views across the city and others to visit the Cinema museum in the same building, once a synagogue. Others discovered the museum of Egyptology or enjoyed a leisurely lunch.
Susan and some of the female contingent went clothes shopping on the Via Roma.  Most of us met up at a restaurant on the Piazza Vittorio Veneto that evening for a final al fresco meal, enjoying the all too rare opportunity to eat outside in the evening in comfort.

Thanks from all of us Susan from all 30 or so of us for  organising such a great trip.

For anyone still reading, William Turner visited the Aosta valley in 1836. You can see his watercolour of the Roman  bridge  at Pondel from the following link : http://www.tate.org.uk/art/artworks/turner-the-roman-bridge-at-pondel-looking-down-the-cogne-valley-to-the-val-daosta-d25444