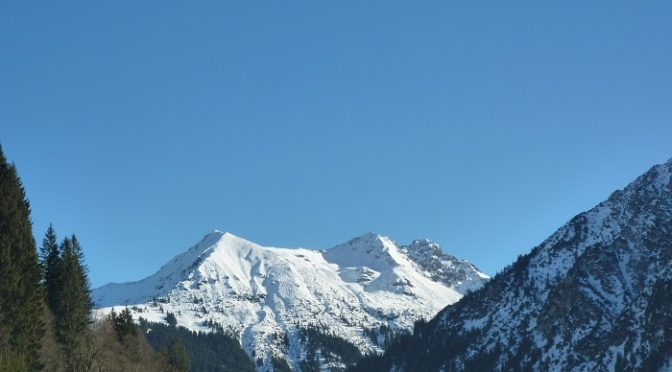 After flying to Munich and a smooth train journey to Fischen, 12 Polyramblers arrived in gastehaus Luitz-Kennerknecht where we received a very warm welcome. Instead of doing a walk around Fischen, we drank beer in the lounge with our hosts (Katja, Alex and their parents) and had a lovely glass of apricot schnapps. We had a nice dinner in Beim Kreuzwirt (booked by our hosts) accompanied by a musician and his accordion. Back at the guesthouse, a few of us had a nightcap while the rest went to bed after a long day of travel.
There were low clouds when we got up and, after a hearty breakfast, we made our way to the bus station where we caught a bus to Bolsterlang. We took the Hornerbahn cable car and arrived at the top of the mountain above the clouds in the sunshine. It felt like being on top of the world. We did a lollipop-shape walk, stopping after a mile at Berghaus Schwaben for a drink. We left the Strollers there and continued the walk. We stopped for a light lunch at Berghaus Schwaben on the way back and the Strollers were still there. They made their way back to the cable car but stopped there for lunch. After their lunch, the Hikers took the cable car down and walked back to Fischen across country. The Strollers also took the cable car down and walked back to Fischen along the road. Dinner was at the Bauernkeller restaurant followed by a nightcap in the guesthouse.

After breakfast, on another sunny but very cold day, the Hikers and the Strollers took the train to Oberstdorf and then the bus to Kleinwalsertal in Austria. The Hikers walked from Mittelberg to Baad along the Promenadenweg and the Hohenweg. Words are not enough to describe the scenery – look at the photos. We then followed the river Barguntbach on a high path and arrived at the Bargunthutte where we met the Strollers who had taken the bus to Baad and then walked up the river along the low path. After lunch, the Hikers walked back to Baad and Mittelberg and, as it was a lovely day, we continued to Hirschegg where we took the bus back to Oberstdorf and the train back to Fischen. The Strollers walked down to Baad where they had quite a long lunch stop. They then took 2 buses to Schollang and walked back to the guesthouse. In the evening, we had dinner at the guesthouse. We were served specialties of the Allgau region and a delicious dessert made by Katja’s brother. The meal was copiously accompanied by beer, wine, schnapps and conversation.

For our last day, the Strollers strolled in Fischen and, in Danny’s case, had some ‘me-time’ reading the paper. The Hikers walked to the Hinang waterfall, one of the prettiest in the Allgau. The path was very slippery around the waterfall with ice shining like diamonds. We then walked up through pastures and woodland with beautiful views of the valley and the mountains. We descended through Schöllang and Au and made our way to Fischen for lunch – passing the river where Stuart’s pet trout was waiting for a treat. It was soon time to say goodbye to the lovely Kennerknecht family who had looked after us so well during our stay. After a smooth train journey to Munich, we flew back to London after another lovely weekend in Germany.