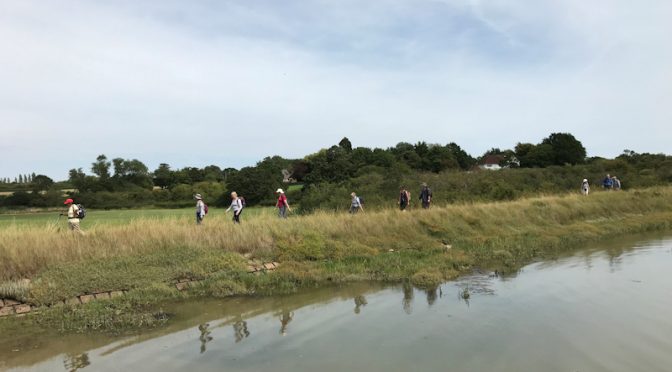 Sun and cloud on this lovely summer day for a walk in the Essex countryside for 15 Polyramblers. We left Southminster on a country lane where we pilfered some cherry plums along the way. We negotiated some decrepit stiles, crossed two fields full of nettles and braved paths with warnings of adders but we also saw some interesting rowing boats being prepared for a crossing of the Atlantic. After 4 miles, we arrived in Burnham-on-Crouch, known within sailing circles as the ‘Cowes of the East Coast, for an earlylunch at the Anchor pub or a picnic. The remaining 8.5 miles were along the river Crouch on the sea wall. Once we left Burnham, we went along Riverside Park around the yacht harbour. We reached the hamlet of Creeksea with its tiny harbour, where some people were swimming (we would have lost Harriet there).  We passed some strange contraptions which we found out were for disc golf (Google it!).  After a while, there was a small deviation away from the river when we had to climb Butts Cliff which is regarded by geologists to be one of the most important London Clay sites in Britain.  In the distance, we could see Stokes Hall. There were quite a few boats on the river with people – like us – enjoying the good weather. Three Polyramblers left us in Althorne and the rest of us continued the walk with the river on one side and fields on the other.  We passed Bridgemarsh Island which is uninhabited saltmarsh and after climbing a few stiles, we reached Blue House Farm Nature Reserve (a site of Special Scientific Interest managed by Essex Wildlife Trust).  We stopped for a rest by a bench dedicated to someone who liked the view.  We finally reached North Fambridge where we had another brief stop at another cherry plum tree before taking the train back to London.