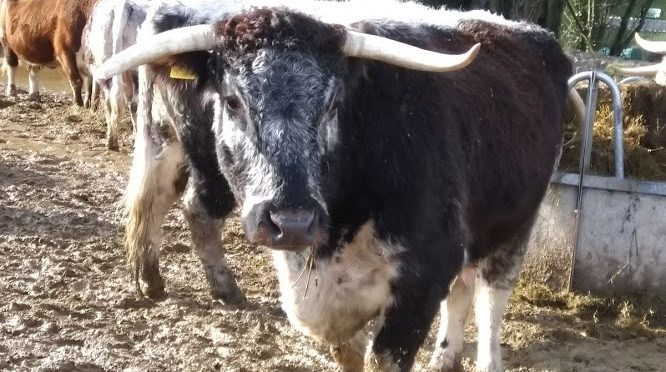 Warnings about hills, stiles and mud had probably put some people off, so it was 9 elite walkers that assembled at Oxted [a generous description for some of us! Editor]. We got mixed up at the station with another group of walkers who were also heading north, but they looked a good deal more determined than us so we let them go ahead. We made our way through Oxted, stopping to say hello to a large and friendly ginger cat. From there, it was over the M25 and our first climb of the day, and then along a ridge following the Vanguard Way. The sun was shining and the views were good. As we dipped down off the ridge, we met our first small herd of English Longhorns with their distinctive brown and white markings, and horns going in all directions.

Our second climb took us to the top of Nore Hill from where you can see the London skyline. As we made our way to the pub, there was some impressive and delicate funghi to be seen, beautifully offset by brilliant green moss. Snowdrops were out and daffodils not far behind.

At the pub, we were met by another Polyrambler who had made her way by train and bus. We were well served with large helpings of food. The friendly locals seemed to own several, equally friendly dogs between them. Hopeful eyes followed our every move as we ate – they were disappointed! As we left the pub, a bit of light rain came our way, but it was only a 50 min walk downhill to the station. The llamas I had encountered on the recce were nowhere to be seen, so we had to make do with some attractive hens as a point of interest. A surprisingly good day out for early February.  Sandra

Photos by Mike and Gillian