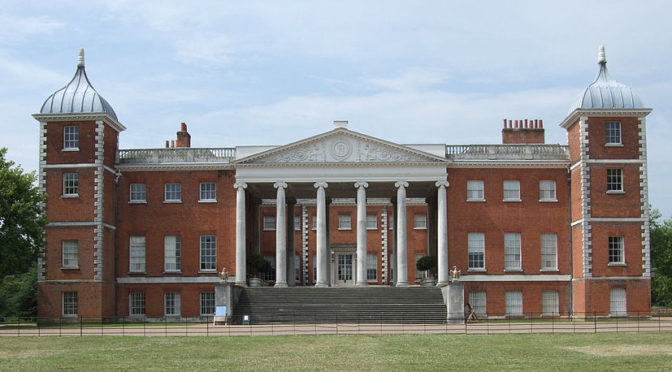 On a bright Saturday morning, with the promise of a coffee and toilet stop after 15 minutes, twelve Polyramblers set off from the station heading for Osterley Park. Shortly after entering the park the grand facade of the sixteenth century Osterley Park House came into view. Sadly, both the house and its tearoom were closed for filming of ‘The Crown’ but we were able to use the toilets.

Leaving the park, a short walk through Norwood Green passing the 400-year-old Plough pub and twelfth century St. Mary’s church brought us to the Grand Union Canal. We followed the towpath for 3Km to reach our lunch stop at The Fox Inn, stopping to view Bixley Field, Brunel’s Three Bridges, walls of the former Middlesex County Lunatic Asylum and the Hanwell flight of six locks. A short diversion through Glade Park revealed several trees planted by Hilary’s conservation group including the endangered native Black Poplar.

Clive, who is a lock volunteer, joined us for lunch after which he kindly gave us a short talk on the history and conservation of the canal and its locks. We carefully walked across the lock gates and continued through meadows adjacent to the canal before following a boardwalk through Longwood Nature Reserve, a remnant of ancient woodland. A short walk along the road brought us back into Osterley Park where we followed the banks of the picturesque Middle Lake eventually retracing our route back to the station, visiting the excellent farm shop en route.

A huge thank you to Hilary and Clive for greatly enriching our walk with fascinating facts and to Dominique for the photos.

photo of Osterley House by Jim