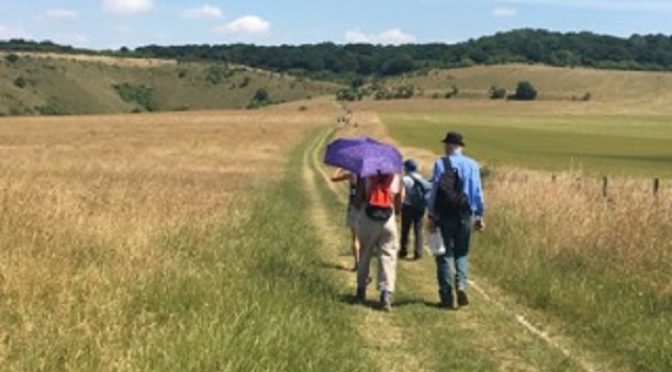 Despite soaring temperatures and the England world cup match, 9 polyramblers turned out for the walk.  The advantage of the conditions was that there were far fewer people on the Ridgeway than would be normal and the heat was made more bearable by a gentle breeze.   Lunch in the Valiant Trouper in the pretty old village of Aldbury was excellent and as it was a football-free zone (i.e. no TV) there weren’t many customers so we were very well taken care of.We noticed after lunch the heat had intensified as we set out up a steep path out of the village up to the Bridgewater monument on the Ashridge estate.  From there we turned into dense woods, which provided much welcome shade,  though on reaching the edge of the woods at Northchurch common we, for a brief moment, lost our direction.  Getting back on track again, we started out our descent from the hills down to the Grand Union Canal.  We then followed the footpath along the Grand Union canal into Berkhamsted.  We had been oblivious to how the football match was progressing until we walked passed a Football Club on the banks of the canal and deduced from the loud cheers England must have just scored.

Despite more frequent water stops than normal, I suffered an attack of heat stroke and almost passed out on the journey back to Euston where I was taken to the medical room and attended to by a First Aider.  Everyone will be pleased to hear I made a speedy recovery and slept it off after I got home.