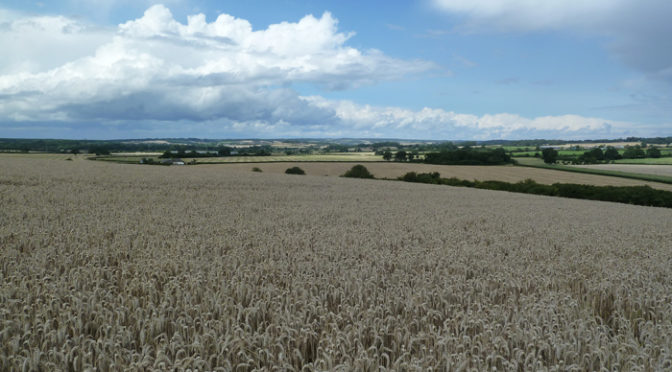 With the rival attraction of Barbara and Hazel’s walk, I was pleased that 8 of us turned up at Waterloo Station. It was the first day of the major upgrade of the station, involving closing 10 platforms. The normally fast trains to Alton were making additional stops so it was well after 11.00 am by the time we started our walk. The weather was dry and pleasantly warm but rain was forecast for later. A short climb from the station soon brought us to a fine view to the south, from where  our route took us to West Worldam and towards Selbourne before turning west. It became quite overcast with spots of rain so we had an early picnic with shelter near at hand. In fact the sun came out and we enjoyed a very pleasant stop, until Pam was stung by a bee. Fortunately Irene was on hand with the necessary supplies and expertise to render prompt first aid. A further climb took us to Northfield Hill, with great views back towards Alton. I had hoped to stop at the Rose and Crown in Upper Farringdon, but sadly it is now closed, though we later learned that there may be a buyer in the offing. By this time there were flashes of lightening and rumbles of non too distant thunder and we were pleased to take shelter in Lower Farringdon church, where the annual village competition for fruit and veg, cakes and jam was taking place. No sooner inside and the heavens opened. We spent a very pleasant 20 minutes or so, talking to locals and sampling a very fine carrot cake. It was distinctly fresher as we emerged, with steam rising from the fields in the evening sun. Passed the impressive Chawton House there was  time for a quick drink in in the village pub / cafe according to taste. A pleasant walk into Alton and along its long High Street for our train, which fortunately made several fewer stops on the return journey.
Thanks to all who kept me company.
Mike