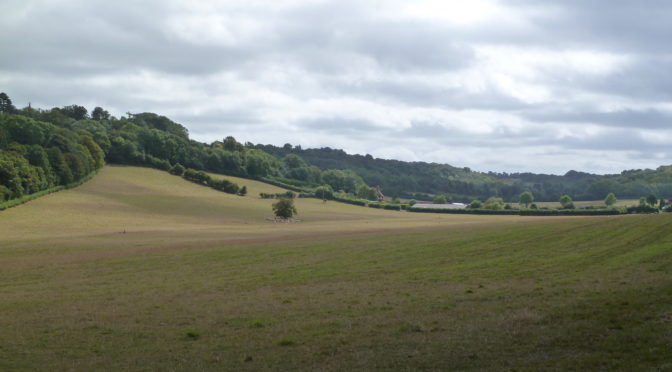 Over the previous bank holiday weekend, the club had been to Skipton, returning late on Tuesday, so Sandra was not expecting a large turnout. We were pleasantly surprised to find 16 of us at Knockholt station. The weather was warm although rain was forecast for the afternoon. Our route took us in a sweep to the south and west, across attractive chalk downland and the occasional golf course. We stopped to talk to a vociferous couple of goats. There was more than a hint of autumn in the air, with some trees beginning to turn. Just before Downe, our group managed to split itself into three and there was a confusing ten minute period of phoning and shouting till we became one again. We passed Charles Darwin’s house which those of us who had visited, strongly recommended. We  lunched in the excellent Queens Head pub in the village where the helpful staff  gave us with a room to ourselves and took our orders at our table. Heading north, it was just coming on to rain as we did the last half mile or so to Orpington station and so we congratulated ourselves on having had the best part of the day. Our thanks to Sandra for reccying and fine tuning the route.