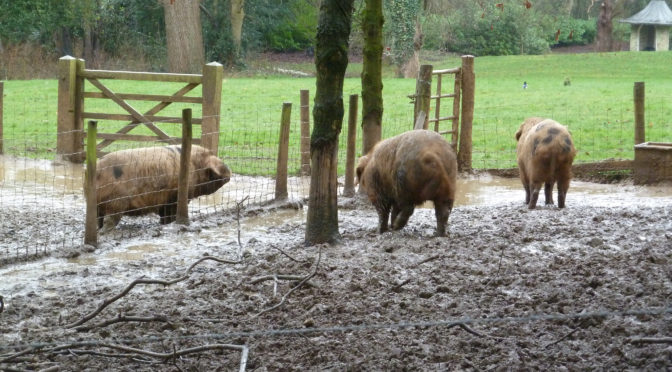 Remarkably, 17 brave souls and 1 dog turned out on a wet day for a walk from Woldingham with an absolute guarantee of mud. I had altered the morning route to avoid some of the worst of it, and this involved some lane walking. At the North Downs Way viewpoint, high above the M25, we encountered an even larger group from the Southbank Ramblers who were doing a similar walk and stopping in the same pub. We sped on and arrived before them, only to find that they were short staffed in the kitchen and some dishes arrived late. However, well refreshed, we set off again in rain that was by now heavier, with only 1 member opting for the bus. The afternoon was muddier but varied. We saw snowdrops and daffodils, pigs wallowing in mud, pretty almshouses, ducks, swans, and a heron. We arrived at Oxted station just before the Southbank Ramblers to discover that a conscientious and public spirited member of the station staff was intent on returning a piece of lost property to an unknown walker from the morning train. This turned out to be Laura’s watch! So it was a soggy but happy group of walkers that boarded the train back to London. Teddy the dog, who started off bright eyed and bushy tailed, was equally muddy and bedraggled at the end, but with his dignity intact, despite being barked at by another dog at the station. Thanks to all who came out on an unpromising day.  Sandra