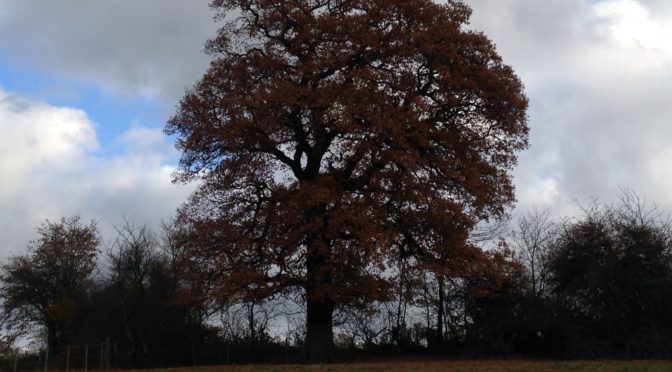 A cold but dry day for this winter walk from the large village of Brookmans Park.  After walking along an avenue lined with nice houses and stopping to say hello to a friendly horse, we crossed the A1000 and followed the edge of the Brookmans Park BBC Transmitting Station.  This transmitting station played a crucial part in the history of broadcasting in Great Britain, as the first purpose-built twin transmitter station in the world capable of broadcasting two radio programmes simultaneously when it was competed in October 1929 (thank you Wikipedia).  We continued our walk through farmland and arrived to The Woodman pub in Wildhill, a 10 times winner of the Hertfordshire CAMRA pub of the year.  I had not warned the landlord that we were coming as I did not think that many people would turn up but our group of 14 Polyramblers was warmly welcomed.  We enjoyed the beer, cider and the doorstep sandwiches.  The sun came out in the afternoon to highlight the end of the autumn colours.  We walked through woodland and winter wheat fields (according to Stuart and based on the Archers).  The end of the walk was mostly along country lanes so we were not too muddy when we reached the station with only 5 minutes to wait for our train back to London.