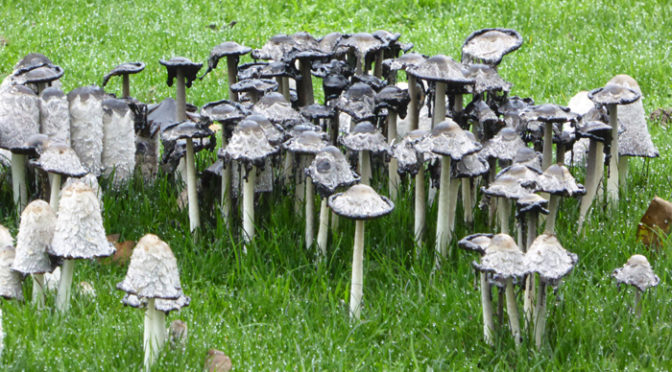 There were 14 of us on the train to Witley.  Rochelle  introduced us to her friend Laura who’s lively poodle Teddy happily made his own introductions. The weather was dry and mild if somewhat misty. The autumn colours were truly wonderful  as we made our way along largely woodland paths. The damp conditions had produced spectacular displays of fungi, but none of our party were sufficiently brave  and/or savvy to do any foraging. We passed under the A3, just north of Hindhead, where it now passes into a tunnel, opened  in 2011. We crossed a freshly manured field on which Teddy lost no time in rolling around. He was a bit non grata with  humans for the rest of the walk but his charms seemed undiminished as far as other dogs were concerned. We climbed gradually up towards Hindhead, pausing at the memorial at Highcombe Copse. This was erected by WA Robertson in memory of two younger brothers who died in the Great War. WA Robertson was a generous benefactor of the National Trust, who were able to purchase a number of properties.

We reached the Devils Punchbowl and lunched in the busy but efficient National Trust Cafe. The area  has been transformed since the A3 has been in tunnel. There are several new walks and nature trails and it’s clearly become a popular spot. The hard road surface has been removed and nature is gradually taking over. It was strange for those of us who had driven  this once busy road to  walk along its old course.  We climbed up to Gibbet’s Hill where the view to the north was slightly misty but still pretty decent.Turning south, we descended gradually to Haslemere , through woods ablaze with autumn colour.

Sadly, the original leader Sandra was unable to take part following her fall in the Pyrenees, but she is making a good recovery and will be out again with us soon I’m sure.

Thanks to Pam for the photos.